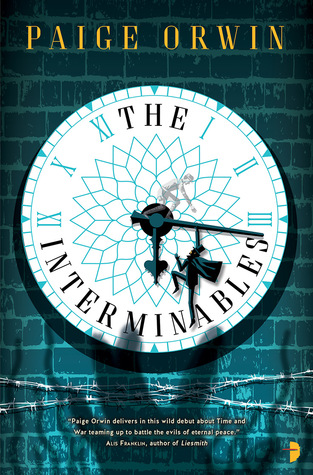 Something I’ve noticed and really appreciated about publisher Angry Robot is that they have taken some risks and are putting out some science fiction and fantasy that is highly unusual and often edgy.  They appear to be taking some chances that other, more established publishers aren’t taking.  Paige Orwin’s The Interminables is no exception to this unusual and edgy work.

The story takes place in our world, or one very much like our world, except that magic is real.  Edmund Templeton is the “Time Thief” — he is able to borrow time from others and use it for himself.  At some point prior to the start of the book, an immortal being invaded the earth, destroying much of it.  On this immortal’s death, magic flooded the earth, along with some dangerous creatures and unusual objects.  Edmund works to restore some sort of order to the earth and does so with Istvan – a ghost from World War I who is bound to Edmund in some way.

But there are events in their pasts that are not resolved and threaten everything they know – or think they know.

I knew we where in for something fun and unusual when I read: “Edmund had been thirty-five for seventy years.”

I was definitely right about ‘unusual’ but ‘fun’ might not be the adjective I’d use to describe this read.  This is an ambitious work – the scope and magnitude of the characters, dealing with uncontrolled magic, traveling through time is really incredible.  It demands that the reader pay attention and to be prepared for something a little out of the ordinary, even for a sci-fi/fantasy novel.

This is not a light read, and not a positive-feeling read which means a lot of readers may not take to this.  I struggled to get a feeling for Edmund (I think I like Istvan much more) but because of what Edmund is struggling with, I don’t feel I could associate with him, although I do feel as though I came to understand him more.

Though challenging, I enjoyed what author Orwin did with this novel and I look forward to reading more from her.

Looking for a good book?  The Interminables by Paige Orwin is a unique, sometimes challenging read that really grabbed my attention.