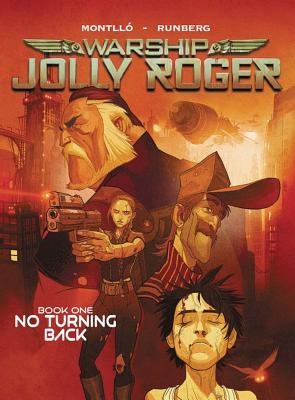 This looked interesting to me, hence my requesting an ARC, but I’d have to admit that I didn’t have the highest of hopes for the book.  Something about it just gave me a feeling of being a bit ‘cheesy’ or too much of a cartoon.  But I did get caught up in the story and quite enjoyed this read.

A prison break creates a lot of confusion and a small group of prisoners are thrust together to make a daring escape.  In the rag-tag party are Jon Monro, a former Confederation Commander serving a life-sentence for a war atrocity that he was ordered to commit; a starship mechanic with the Separatists (rebels); a smuggler; and the youngest person ever committed to the prison – a teenager who is a robotics prodigy and hasn’t spoken since being sent to prison.  Monro insists that they must stick together for safety and he has some big plans as long as they are at it.  They crash a press party and kidnap the president of the Confederation and then trade him for a massive ship which is well armed and which will help them avoid recapture.

The book moves along well and the art is really strong.  Slightly representational with bold coloring and lots of depth.  It is really beautiful to look at and helps propel the story.

The story is simple and full of action.  The characters are a bit stereotyped and I can’t tell if author Sylvain Runberg is paying homage to a number of classic sci-fi series’ or simply borrowing from them.  Munro’s middle name is Tiberius, which is clearly borrowed from the original Star Trek television series (it’s an unusual name and not one likely chosen at random).

The tough female mechanic feels like she was pulled right out of Firefly or Star Trek: Voyager.

Both the smuggler and the boy genius are traditional sci-fi tropes and nothing about them here makes them stand out as anything other than the stereotype.

Yet we have to realize that these stereotypes exist and are used regularly because they often work.  I don’t usually enjoy the boy-genius characters, but “Thirteen” is one of the more interesting characters in this book.  Or maybe it’s his creations.  In either case, it leads to a great deal of mystery and intrigue as we hope to find out why he was locked up and where the future will take him.

All four escapees have a back story that really looks promising and there is plenty of action and beautiful art to keep the reader turning pages.  It just doesn’t feel wholly original.

Looking for a good book? Warship Jolly Roger is a fast-paced, good looking graphic novel but it relies on a number of stereotypical tropes.