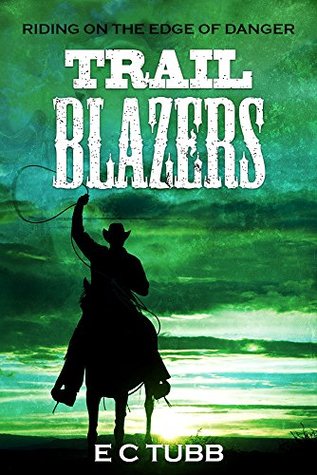 It’s not easy to find westerns these days, with sci-fi/fantasy and mysteries being more popular than ever, so I am thrilled that there are a few publishers releasing western titles, even if some of them are reissues (as is the case here).

Although I am slightly familiar with author E. C. Tubb’s work, it has primarily been as a writer of science fiction.  This is only the second western of his that I’ve read.  Like most of his work (that I am familiar with), this is a solid story with strong characters and plenty of action that moves along nicely.

Here, just after the Civil War, former soldier Greg Halmar is looking to find himself, to make something of his life as he has no interest in being back in the military (though the military may have made him a pretty hard man).  Halmar saves a man’s life and the man convinces Halmar to come work for him, raising and driving cattle from Texas.  There’s a little problem though… some outlaws in Kansas have been pretty tough on the cowboys trying to drive herd through their territory.  But Halmar has another idea…instead of driving the usual routes to markets in Kansas, there may be more money heading farther north and west.  Though the going may be tough, Halmar is just the man to make the drive.

This book is long on action and short on depth.  We move from one exciting moment to the next and never look back at what has happened and what could be coming up behind them.  There are cowboys, there are Indians, and there are card-sharps, and there are bandits, and Halmar is the tough guy to see it all the way to the end.

I had fun here.  Sure … I want to know more about the jayhawk bandits.  Did anyone come after them?  But I forgot about the bandits when the Indians attacked anyway!

If you like westerns, chances are you haven’t read this book that was originally published back in 1956, so you’ll want to check this one out.

Looking for a good book?  Trail Blazers by E. C. Tubb is a fast-paced western that satisfies the desire for a quick, light read with tough, stock western characters.