THE PRINCESS AND THE CLOWN – Ian Thomas Malone 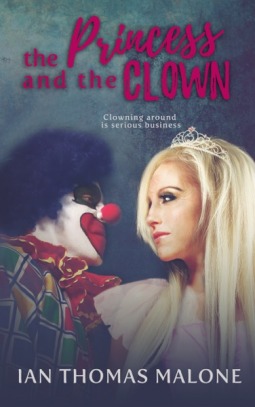 If you cross bizarro fiction with hard-core erotica you might get something that resembles The Princess and the Clown by Ian Thomas Malone.

Ralph is a down-on-his-luck clown who has seen better days.  Known as Jango the Clown he was once quite popular.  Now he’s relegated to performing at children’s birthday parties.  He gets through the parties, with those screaming brats who don’t want to see a clown, by sipping a little hootch that he’s got tucked away in his over-sized pockets.

But as we start the book, Jango arrives at a party only to meet another clown already there.  This one is the beautiful “Princess Aurora” clown (aka Jules).  Princess and Jango sit off to the side, out of sight, waiting for their cue to go entertain and Princess suddenly has Jango go down on her, performing oral sex while they wait.  Jango’s got it made!

The party goes moderately well and they decide to try performing together a few more times and Ralph loves the sex he gets.  But there’s a problem … Jules isn’t a very nice person.  Pretty on the outside but a black heart and vile on the inside.  Whereas Ralph is just the opposite.  He’s about as ugly as ugly can be, but he’s basically a pretty good person (except for his lascivious behavior and drinking before performing in front of a bunch of kids).

This is … it’s … it ….  This is short. You can probably read the whole thing while sitting on the toilet, which is kind of appropriate.

I think that there’s supposed to be some sort of message here about appearances being deceiving, or how erotica really isn’t very sexy, but that message gets lost behind lines like:

The smell of vodka and cigarette on her breath was the finest aphrodisiac he’d ever inhaled. …

He watched Jules go to town on a huge burrito, “Damn, where do you put all that?” he asked, taking another stab at flirting. …

She reminded him of a Hot Pocket.  Smoking hot on the outside with an icy interior.

Okay…that last one made me laugh, I admit.

The book relies on one through-line, which Jules says near the end: “I’m a horrible person and you’re one ugly motherf*er.  A perfect fit if I’ve ever seen one.”  If you like this idea, you might like this book.  Unfortunately, I don’t.

The Princess and the Clown