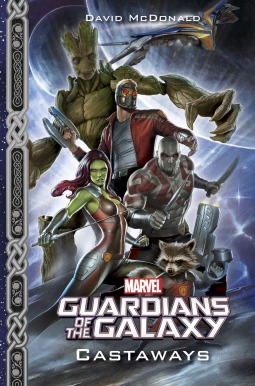 I have enjoyed a lot of novels based on comic book characters – I’ve definitely enjoyed more than I haven’t – and so I look forward to books like this, Marvel’s Guardians of the Galaxy: Castaways, which tie in to comics and movies.  Add the fact that it is targeted toward younger readers and I expected a fast-moving adventure.  Boy, was I wrong.

Just as I was disappointed with the Thor book – same publisher (see that review here) – this book also lacked the verve that made the movie something special.

There is a little frustration among the Guardians.  Perhaps they are working too closely with one another for too long?  So when their ship crashes on a planet with no way to repair the ship and leave, the Guardians go their separate ways to face the unknown on the planet alone.  But of course they’ve spent a lot of time working as a team, and they realize that to overcome the obstacles preventing them from leaving, and to help the natives of the planet to see success in growing, they must work together.  But first they have to find one another.

Mostly with this book I was just bored.  It felt a little episodic – as though it were written for a regularly published comic series.  This could be developed into page-turning excitement, but simply switches the character focus to move the story forward.  I can’t imagine younger readers finding this to be an exciting addition to the Guardians of the Galaxy universe, but I can picture some older fans of the comic (and movie) enjoying some additional time with these reluctant heroes.

For me – someone who was not familiar with the characters until the film came out – I don’t know how this book fits in with the universe that’s already been established in the comics and I get the feeling that this book doesn’t really help me get to know who these characters are.  The whole concept just really feels messy and lost.

Marvel’s Guardians of the Galaxy: Castaways

One comment on “MARVEL’S GUARDIANS OF THE GALAXY: CASTAWAYS – David McDonald”