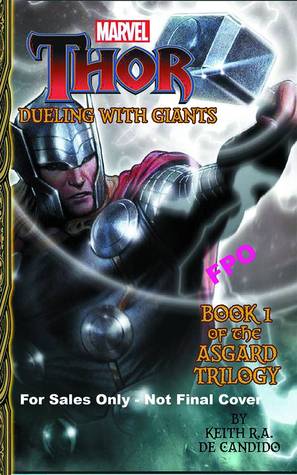 I think that this book is aimed at teen readers … but I’m not quite sure.  There’s a fair amount of the book that follows youthful Thor, Loki, and Sif.  But it’s also dense with prose story-telling.

It’s a pretty simple plot: Thor is in a battle with some trolls trying to invade Asgard when his hammer, Mjolnir, loses its magical properties.  Fortunately Thor is still a god and more than a match for a bunch of trolls, but he does now have to actually work at defeating them.  And once the trolls are vanquished Thor tries to understand how his hammer could lose its powers.  It doesn’t take much thinking for his suspicions turn to his half-brother, the trickster Loki.

The book is pretty straightforward and most readers are already going to be familiar with these characters – probably more through the movies than from the comics – and the book doesn’t really offer anything new by way of who these characters are (with the possible exception of Sif).  This is a plot driven story rather than a character driven work, and as already mentioned, the plot is pretty simple.

One of the nice aspects of the book, however, is that author Keith R.A. DeCandido brings in a fair amount of the old Norse mythology.  As a fan of the myths and a reader of the Eddas, I really appreciated this.

But for the most part, I was left with an “ah, well” feeling.  Nothing drew me in to the story other than that I was interested in a story about Thor.  I happen to enjoy reading books with familiar characters from other media (films, comics, etc). And without a draw into the story, and characters that don’t develop or grow, this really is a pretty unremarkable book.

With the exception of Sif.

Because Sif is one of those characters who we haven’t seen a lot of in the films (I don’t read the comics so I don’t know how developed the characters is there), she is the one character I felt made the read worth-while.

I don’t mind publishers capitalizing on a winning market (superheroes from the films), but I would like to see them offer something a little more worthwhile.  This is a very average read for me.

Looking for a good book? Marvel’s Thor: Dueling with Giants, by Keith R.A. DeCandido is a very average read, even for the teen market that this is likely targeted to.