CROWDED IN THE MIDDLE OF NOWHERE – Dr. Bo Brock 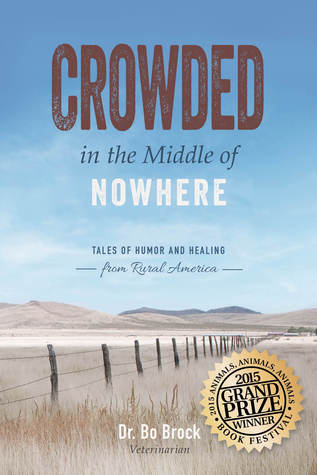 It definitely takes a special sort of person to go in to the business of helping and caring for animals.  Maintaining a sense of humor definitely helps as animals can often be even more unpredictable than humans as patients.  Veterinarian Dr. Bo Brock not only maintains his sense of humor, but shares it through a series of memoir essays.

Brock begins his veterinarian career in the small West Texas town of Lamessa.  Lamessa is the middle of nowhere and indeed it is crowded with veterinarian patients.

Brock shares a good number of stories and I think it’s fair to say that the humor in at least half of them have to do with the human owner of the patient as much as with the animals themselves.  My favorite would be the time Brock heals a sick cow who then goes on a rampage and he describes the over-weight farmer running and trying to get in to a truck and Brock gives him a wedgie by pulling him into the truck by his underwear.

This is the sort of humor you can expect from the stories in this book.  Occasionally Brock gets sentimental and it works well, reminding the reader that this sort of work isn’t always funny.

It’s hard to read a book like this and not compare it to the works of James Herriot.  There are plenty of similarities due to the very often unpredictable nature of animals and the authors’ love for animals.  But there are plenty of differences between Brock and Herriot.

Brock writes in short bursts which are often entertaining, but they also often lack a punch.  His stories typically don’t build but instead are all very evenly paced … fun in short bursts, the way he writes, but not necessarily powerful material for just sitting and reading.

Looking for a good book?  Crowded in the Middle of Nowhere by Dr. Bo Brock is a fun and funny memoir of a veterinarian who has plenty of stories to tell about his work with animals and the people who own them.

Crowded in the Middle of Nowhere

One comment on “CROWDED IN THE MIDDLE OF NOWHERE – Dr. Bo Brock”