FROM RUSSIA WITH LOVE – Ian Fleming 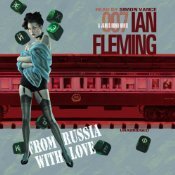 Of course I am familiar with the James Bond films, and while I own a number of the books, I hadn’t gotten around to reading any of them (still haven’t).  When I saw this audio book available at my local library, I decided my commute to work would be a great time to finally experience the written (spoken) word of Ian Fleming’s James Bond books.

First, I was quite surprised that James Bond doesn’t even appear in the book until a quarter to a third of the way through.  Instead we get a lot of set up from the Russian point of view.  Bond, it seems, is causing a bit of a disturbance to the powers foreign to Great Britain and those in foreign power want to Bond gone.  His weakness, they know from years of observing him, is women.  And so the Russian female spy Tatiana Romanova is assigned to lure Bond where his defenses will be down and he can be eliminated.

Romanova, despite being a top Russian spy, is a little bit naive.  She believes that Bond will be okay and that the Russian government means him no real harm.  The fact that she has fallen in love with Bond complicates matters.

The book moved much slower than I was expecting, though I knew it wasn’t going to be a racing thriller.  Also as expected, there isn’t really a lot of high-tech super secret weaponry or gadgets.  It’s a cat-and-mouse spy story that carries on the misogynist thinking of the late 50’s/early 60’s.

I’m glad to have listened to this – narration by Simon Vance is smooth and well performed – and I look forward to reading or listening to other Bond books in the near future.  But it’s hard to imagine these being big sellers if they were newly published in today’s market.

Looking for a good book?  The James Bond books are now classics and From Russia With Love, by Ian Fleming, shows just how dated the books are.  Still, a fascinating read for mystery/thriller fans.

From Russia With Love