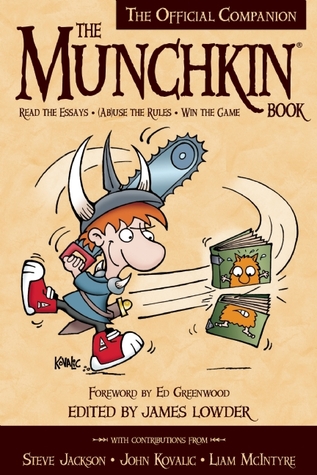 There is a nice variety to the collection.  From essays from insiders who have a history with the game and the company, including a play-tester, to anecdotal reminiscences of playing the game.  Between each essay is a Munchkin playing card, illustrated by John Kovalic, the artist for all the cards.  If this book happens to be your introduction to the game, these card samples provide a pretty good insight to what is in store.

I was personally more interested in the essays from those who’ve had hands on experience with the creation of the game: Steve Jackson, Randy Scheunemann, John Kovalic. In some cases, with the other essays, I felt the writers were trying too hard to be funny Jennifer Steen’s “Monster Grievances” stands out in this regard.

How often do we get to read essays about gaming, though?  This is a wonderful opportunity for geeks to see that there are plenty of others out there who share in the joy of card games and humor (with a little D&D thrown in).  I would personally love to see more such collections about popular games.

Foreword : Why I Love to Dance in Pants Macabre – Ed Greenwood
Introduction : The Space Between the Cards – James Lowder
Munchkin by the Numbers – Steve Jackson
To Backstab or Not to Backstab : Game Theory and the Munchkin Dilemma – Andrew Zimmerman Jones
Madness in 168 Easy Steps – Andrew Hackard
Monty Haul and His Friends at Play – David M. Ewalt
Monster Grievances – Jennifer Steen
Screw You, Pretty Balloons : The Comedy of Munchkin – Joseph Scrimshaw
On with the Show : Confessions of a Munchkin Demo Pro – Randy Scheunemann
Munchkin as Monomyth – Jaym Gates
From Candy Land to Munchkin : The Evolution of a Young Gamer – Dave Banks
The Emperor of Fun : An Interview with Phil Reed – Matt Forbeck
How Playing Munchkin Made Me a Better Gamer – Christian Lindke
Flirting 101 : Throwing the Dice in Munchkin and in Love – Bonnie Burton
The Charity Rule – Colm Lundberg
Munchkin Hollywood – Liam McIntyre
My Favorite Munchkin – John Kovalic

Looking for a good book? The Munchkin Book is a fun collection of essays about designing, testing, illustrating, and playing the very popular, satirical card game, Munchkins.