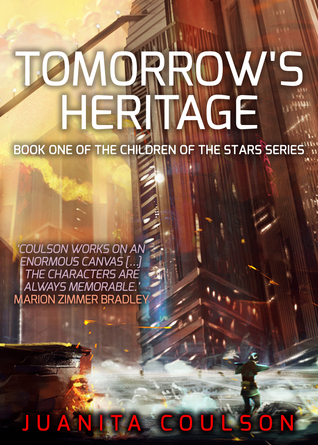 I haven’t read much by Juanita Coulson, but when I see her name I have two reactions … first, that she was one of the early authors for the LaserBooks series in the 1970’s, and that I met her and Buck at a convention in Minneapolis many, MANY years ago.

Reading this book brings to mind another thought … science fiction writing has changed over the past four decades.

The story: Alien life is making its way to Earth.  Not much more is known other than that an intelligence outside the solar system has sent a signal and it’s getting closer.  On Earth, Ward Saunder was the leader of the Saunder family and fought to protect his family from chaos and death with the approach of the aliens.  Now, the family matriarch, Jael, is continuing the battle, determined to make the Saunder family into a formidable dynasty.  But that proves challenging since the family members are all head-strong and pushing against the aliens, and against family.  Who will win the battle of control?

This is a pretty fascinating idea and was generally well received/reviewed when it was first published in the 1980’s.  But just as fashion and music has changed over the decades, so has literature and reading tastes.

The book starts out with a bang and really captures the reader’s attention, but then book slogs through 300 pages of family squabbles.  Aliens on the way?  That’s not nearly as important as the internal strife of siblings.  Right?

There’s a great truth to this … we all go on living our lives despite disasters and atrocities happening all over the world.  The difference?  Our lives aren’t meant for dramatic story-telling.

Mostly I just didn’t ever care about the family.  Nobody was particularly interesting or worth caring about, which makes for 300 pages of slow reading.

The book reminds me of a sci-fi version of the television shows Dallas, or Dynasty.  Is it coincidence that these shows were popular in the 1980’s, when this book first came out?  I don’t think so.  Would those shows be popular today?  Probably not so much.  Neither will this book.

Looking for a good book?  Tomorrow’s Heritage is a reissued book by Juanita Coulson.  It shows its age.  It is about a dysfunctional, powerful family at a time when aliens are about to invade the earth.

series: Children of the Stars #1