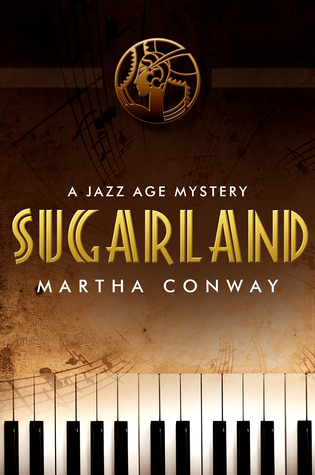 When the offer to review this book came through, I was very excited.  A mystery … a favorite new genre for me.  Set in the 1920’s … one of my favorite eras for researching and writing about.  And jazz music … easily my favorite musical style.  And I looked over the information about the book, and about the author, Martha Conway … Edgar-nominated.  Published in a number of fine literary journals.  This really seemed right up my alley.

So I dug into this with high expectations and a good deal of eagerness. And I was disappointed.

Right from the start I had trouble getting into the book.  The writing was dull and listless.  And perhaps the worst sin of all … we are simply told everything.  This is the opening two paragraphs:

AT TWO IN THE MORNING the trains were stopped for the night, and the old wooden depot, manned only during the day now that the Great War had ended, was deserted.
Eve could see her breath in the cold January air as Gavin Johnson helped her up the last step of the empty train car. Then he jumped up himself. He moved closer and she smelled whiskey and something musky he’d splashed on his face. He pressed her against the rail and began to kiss her with lips cold at first but getting warmer. That was all right.

There is something about this style that I find jilting or halting.  If this were intended to mimic the feeling of riding the rails, that would actually be really fascinating.  But it is this way all through the book.  Here I’ve opened the book to a random page:

They waited for a coal wagon to cross the street, pulled by a couple of skinny horses covered with matching green blankets. When a motorcar sputtered by, both horses skittishly lifted their heads, and Eve and Lena had to wait to get into the alley behind them as the coal man struggled to get the horses moving. Lena pulled out her pocket watch. She felt warmer and stronger in long pants. Also a sensation she hadn’t had since she was a girl—that she could break out in a run and leave everything behind. No one looked at her twice.

The halting style is much the same here.  This probably works really well in a short story, but 300 pages of this writing style grows tedious.

I was also surprised at how simple the story was.  For a 300 page mystery I was expecting a little more involvement of sub-plots but this is pretty straight-forward one story about a missing girl, Chickie, and the world of speakeasies and nighttime jazz clubs.

So what did I like?  Why two and a half stars?  I liked the research that went in to the period.  As I stated in the beginning, I really like this era.  I liked the way the jazz world was portrayed and I liked the inclusion of the separate worlds for blacks and whites (which is always uncomfortable to read about but an important aspect of American life at this time).

But the relatively flat portrayal of characters and the writing style that tells, not shows, and clips along without giving much depth or color, prevented me from really being brought in to the story.

Looking for a good book?  Though I liked the attempt and the choice of setting for this story, I can’t recommend Sugarland by Martha Conway.