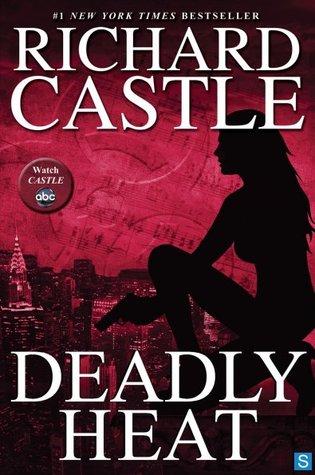 Books, using characters created for television, especially in the mystery genre, is nothing new.  I’ve read books about Columbo, and Murder, She Wrote, as well as plenty of sci-fi books.  But this is a slightly different spin on that theme, and it’s kind of brilliant.  On the television show, Castle, Richard Castle is a mystery writer known for two series’ of books.  One of them, the one which the television show revolves around, is a series about a police detective named Nikki Heat.  Someone had the great idea to actually write the Nikki Heat books.

Although this is the fifth book in the series, this is the first one I’ve read, but I don’t think it matters too much, especially if you happen to be a Castle watcher.

Part of what is so fun here is that the Nikki Heat stories are based on Castle stories, which are changed up just enough to fit the ‘block-buster novel’ style of writing.  And although Nikki Heat herself is based on the fictional character of Kate Beckett, she, too, is ‘popularized’ or made into a more sexual, active character than Beckett.  And Jameson Rook, the replacement for Richard Castle in the novels, is a little more cartoonish at times and a little more suave at times…just as you would imagine a writer to write about himself.  It’s a very clever world in which characters are based on the imaginary characters of other imaginary characters.

The story…?  Don’t worry about the story.  If you’ve watched Castle with any regularity, you’ll recognize it immediately, and appreciate the spin.  If you aren’t a Castle watcher, but enjoy the mystery/thriller genre (then, first, how is it that you never watched Castle?) you should still enjoy this action series.

Looking for a good book?  Deadly Heat by Richard Castle is a fun, mystery/thriller book in the Nikki Heat series, made more fun by its connections to the popular television series, Castle.