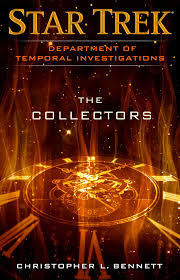 Reading a Star Trek book/story is my guilty pleasure.  I’ve been a Trekkie/Trekker nerd since the early/mid 1970’s and despite an ever-widening circle of reading interests, I return to a Star Trek novel now and again because it’s like getting together with old friends.  It’s comfortable and fun. (When done well.)

This appears to be book four in a series about the Department of Temporal Investigations, but while there’s a definite sense of history in the characters and story, I don’t feel as though I have to read the other books to make sense of this one.

The book is just a tad unusual for a Star Trek book because there are no regular series characters within (well…maybe a token mention).  Instead, this book (novella) features two characters from one episode of Star Trek: Deep Space Nine – Agents Dulmer and Lucsly, from the Department of Temporal Investigations.  While having only made the one appearance, the characters (as written, directed, and performed) definitely made an impression on fans of the series.  Fortunately, because of the series of books continually published by Pocket Books, we fans can keep seeing favorites (like Lucsly and Dulmer).

As you might expect, the story centers around some disturbances in time.  A warehouse (of sorts) belong to the Department and containing a number of objects with special temporal properties, has been infiltrated by the Vomnin.  Facing the Vomnin and retrieving the objects is no simple feat considering that time moves at different rates in temporal anomalies.   But it’s all in a day’s work for agents of the Department.

I really just had a lot of fun in this quick book.  And my head didn’t spin too much – which it can do when reading about time anomalies.  This did precisely what I wanted it to do … entertain me for a little bit in a comfortable (familiar) setting.

Looking for a good book?  If you’re a fan of Star Trek in general, and particularly if you enjoyed the episode with Agents Dulmer and Lucsly on Deep Space Nine, then you will definitely want to spend some time with Christopher L. Bennett’s Star Trek: The Department of Temporal Investigations: Time Lock novella.