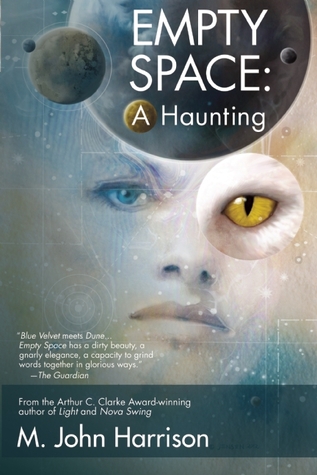 Once again I have unfortunately read a book that is the ending to a series, rather than a beginning.  I’m not sure why publishers don’t make this better known (except that they want to make a sale, of course, and who is going to pick up book three if they haven’t read one and two yet?).  Even the cover, as depicted above, says nothing other than that it’s from the author of Light and Nova Swing.  Would it have been that difficult to say “the stunning conclusion to Light and Nova Swing“?

This is a difficult story to follow.  In large part this is because there are three stories here.  Goodreads describes it as succinctly as possible:

In the near future, an elderly English widow is stirred from her mundane existence by surreal omens and visitations. Centuries later, the space freighter Nova Swing takes on an illegal alien artifact as cargo, with consequences beyond reckoning. While on a distant planet, a nameless policewoman tries to bring order to an event zone where ordinary physics do not apply, only to find herself caught up in something even stranger and more sublime.

These three stories are woven together so tightly that the reader needs to be on high attention to follow what’s happening (and even then, I suspect there will be times when the reader is lost).  Would it have helped to have read the other two books?  Having not read them, I can’t say for sure, but I suspect that knowledge of some of the characters and worlds would have helped here.

So why read this book?  Because it is beautiful.  And the ideas here are lofty.  If you are over 40, or if you read a lot of ‘classic’ science fiction, think about authors such as Theodore Sturgeon, Samuel Delany, Roger Zelazny, or even Philip K. Dick, for their intricate prose and their themes that manage to be both tremendously grand and intricately personal at the same time.

This is the sort of book that you don’t read just once.  You read it again and again because it’s beautiful to read and because there is so much in there that you can’t possibly pick up on all of it with just one read.  This is a book that I will read again, but first I want to read the other two books in the trilogy.  Light is already in my Kindle queue and I know I need to seriously dedicate time to reading it.

Looking for a good book? It is hard to recommend Empty Space, by M. John Harrison, as a stand-alone novel, but it is also difficult to not recommend such a powerful piece of writing.  Go read Light, and then proceed through the trilogy.