WHO WANTS TO BE THE PRINCE OF DARKNESS? – Michael Boatman 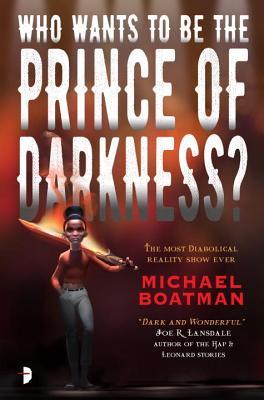 I will admit that I was hesitant to request this book because I was not particularly fond of Last God Standing, author Michael Boatman’s previous book.  But I think it’s only fair to give an author more than one read, and I typically really like the books published by Angry Robot.

In Who Wants to Be the Prince of Darkness?,  Lucifer is in retirement when he hears that Gabriel (the current underworld ruler) wants to model hell after earth and he starts recruiting souls through the mind-numbing medium that is television.  More specifically, through a game-show.

To fight back, and to keep his precious hell the way it was meant to be, Lucifer seeks out a champion to fight for all that is hellacious.  But Lucifer’s Chosen One doesn’t seem to know that he’s in a fight, or if he does, he doesn’t seem to understand what it’s all about.  But it does seem that maybe Lucifer has something up his sleeve.

My first issue with the book is the humor.  Every comic or humorist has a ‘voice’ – a specific sound that is unique to them.  And as an audience member/reader, I’m going to react differently depending on how that voice works for me.  Boatman’s humor voice does not work for me.  It just didn’t feel natural.  I felt that I could hear the author and not the character, trying to say things just to be funny or clever.  When I come across something like this, it usually has the opposite effect on me.  I’m annoyed that someone keeps trying to be funny when they are not.

My second issue with the book is focus. I could tell that the story was making sense to the author, but it was pure labor for me, as reader, to follow the characters and to make sense of what was happening (and often I didn’t care to).  Different chapters have a different character’s view-point.  This is okay, it’s not a unique device.  But it does challenge the cohesive nature of the story-telling.

It doesn’t help that the characters tended to sound the same.  If you aren’t paying close attention to the chapter headings, you will become more confused, not quite sure who is telling the story.  Normally you should be able to tell based on the characters and their speech habits and patterns.  Good luck with that.

The characters here are familiar, in a caricature sense, but otherwise dull.  There was no one that I wanted to care about or to root for.

Typically I really like well-written humor in my fiction.  Subtle, dark, devious … even better.  But humor is really hard to pull off, especially at a novel length.  Think Richard Hooker, or Joseph Heller, or, closer to home in the fantasy/sci-fi genre, Ron Goulart or Robert Aspirin.  But if a book relies on its humor to carry it, and that humor doesn’t flow, then the book will struggle to find its footing.  Such is the case here.

Looking for a good book?  Michael Boatman’s Who Wants to Be the Prince of Darkness? is a darkly humorous fantasy set in and around Hell, but it fails to grab attention or truly entertain.

Who Wants to be The Prince of Darkness?