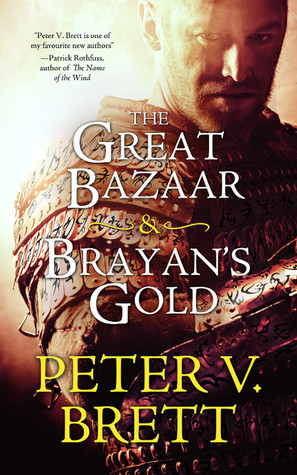 I’m new to the worlds of Peter V. Brett, but I’ve seen his books in the stores, usually pick them up and thumb through them, and move on – not because they don’t look interesting but because I 1) don’t know that I want to invest in another series, and 2) don’t know quite where to start.  All the books look great!  And then I had the opportunity to get an advanced copy of this collection and decided that this was where I would start.  So, unlike most reviewers who are already fans of the series and rate this as part of the series, I come to it fresh.

“Brayan’s Gold” follows young Arlen Bales, an apprentice Messenger about to head out on his first assignment – carrying a dangerous load of ‘thundersticks’ to Count Brayan’s gold mine.  And in case this wasn’t dangerous enough, Arlen is hunted by a giant rock demon known as One Arm.  The demon is out for revenge (it wasn’t called ‘One Arm’ before it first met Arlen).

This was a fun introduction to a character I assume we will see again in the series.  We see that he is young, eager, quick-thinking, and perhaps a little on the crazy side (though almost everyone we meet in this word has a quirk).  The back story of One Arm is very curious and I really want to read more about this.  We also see that this is a world in which magic has a definite place.  I would consider this a modern ‘sword & sorcery’ tale.

“The Great Bazaar” was a little less satisfying and I suspect it is, in part, because it is a prologue to a portion of a novel.  In this story Arlen acquires a map to some ruins, but the story really seems to be a means to explain what a ‘khaffit’ is (a man who has failed warrior training and is the lowest caste in the society.  I found the information interesting (perhaps helpful as I read some of the books?) but as a stand-alone story it paled compared to “Brayan’s Gold”.

There are two more short pieces in this collection, both scenes that Brett cut from one or another of his novels.  “Arlen” was the short story that started the whole thing, which Brett wrote in a creative writing class in 1999.  It tells of Arlen as a seven-year-old boy who already had a wanderlust.  “Brianne Beaten” is actually a tale that points toward the heroic deeds of a character named Leesha (whom I again suspect we see more of in the novels).  Definitely an interesting story which stands well as a story.  I can’t imagine it as part of a novel.

The book concludes with a brief “Krasian Dictionary” (definitely helpful) and a “Ward Grimoire” – a listing of wards and their defensive or combat purposes.

This is a slim book, but it has definitely whetted my appetite for reading some Brett’s novels.

Looking for a good book? The Great Bazaar & Brayan’s Gold by Peter V. Brett is a small collection of tales that fit in his Demon Cycle series but also stand moderately well as good ‘sword & sorcery’ stories.