THE SCIENCE OF SHAKESPEARE – Dan Falk 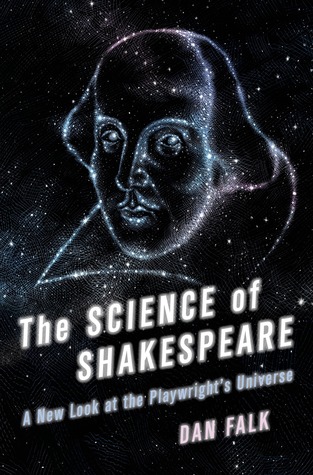 It’s hard to believe anyone could possibly write anything new on Shakespeare.

Considered by many to be the greatest writer who’s ever lived (in the English language, at least), Shakespeare’s works have been dissected by scholars and his life has been researched and studied by many who’ve spent a lifetime trying to learn more about this man.  So what more can we get?  Dan Falk takes a slightly different approach, exploring some of the sciences that Shakespeare calls upon in his canon and connects the dots to some of the leading figures in the scientific revolution that was going on around this time.

From what we know, Shakespeare was not a scientist, but he was a keen observer and picked up on ideas and was able to comment on how humans interacted within the world of changing ideas.  It’s not often mentioned, but Shakespeare (as author Dan Falk points out), was born the same year as Galileo.  This is pointed out not to make an association between the two men, but to put into context what was happening in science when Shakespeare was writing his plays.  Also working in science, a little closer to home for Shakespeare, was John Dee – whose work straddled the line between science and magic and who was, according to history, passionate about theatre.  The connection that Falk draws here seems quite plausible.  And the fact that Dee’s science is often questionable, at best, might explain why some of Shakespeare’s science isn’t always spot on.

One of the problems I had with this book is that the ‘science’ seems a little more targeted than general science.  The Astronomy of Shakespeare might have been a more apt title as much of this book centers around the stars and what was known (or believed) about the universe at that time.

The most interesting part of this exploration is the ‘forensic astronomy’ done by a professor at Southwest Texas State University – reconstructing the skies and trying to determine what stars (or other celestial bodies) might be being referenced in classic works of literature (so, for instance, when Horatio mentions in Hamlet – in regards to the stabbing of Julius Caesar – “As stars with trains of fire and dews of blood” it is this particular astronomer trying to track what comet that may have been).

Falk gets a little more speculative as the book goes on, and he tries drawing some parallels.  He writes about the names Rosencrantz and Guildenstern which “do in fact sound stereotypically Danish” and “What led Shakespeare to choose these names?”  Falk notes that Tycho Brahe once commissioned a self-portrait, which is surrounded by the crests of his extended family, which includes the names “Rosenkrans” and “Guildensteren”.  Falk is not the first person to point this out (as he, himself, notes), but he does try to draw the connection to Shakespeare having an interest in astronomical thinking.

Falk does go on about medical science for a bit, noting “Medical men of various kinds appear frequently in the canon–more often, in fact, than workers of any other profession.”  The connections here are a little stronger, as Shakespeare’s daughter Susanna, was married to John Hall, a doctor.

All in all, there were moments here when I thought that an idea might be worthy or more pursuit and study, but too much that felt a bit of a stretch.  A tighter focus – not something as broad as ‘science’- might have served this well.  I am glad I read this, and there were things I took from it, but it’s not likely to become the next ‘must read’ book on Shakespeare.

Looking for a good book?  The Science of Shakespeare, by Dan Falk, explores some interesting concepts about the role the science revolution of the late 1500’s might have played in Shakespeare’s writings, but nothing is explored deeply enough to really make a difference in the way we see Shakespeare’s works.

The Science of Shakespeare: A New Look at the Playwright’s Universe