Posted by Daniel on May 5, 2016
Posted in: Uncategorized. Leave a comment 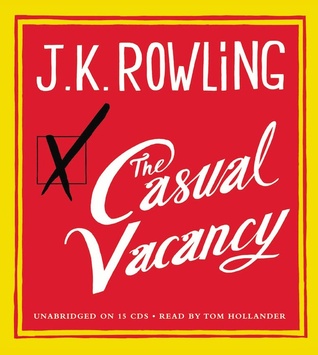 Every small town has its leaders, some loved, some loathed.  Barry Fairbrother was a much-loved city council member in Pagford, but when he drops dead, suddenly, still in his forties, the town is in shock.  But the shock quickly makes way for a race for Barry’s council seat.  The quiet village will face a slough of in-fighting, back-biting, and the airing of others’ dirty laundry.

My wife and I, recently making a spate of long drives, decided we would listen to a few books on CD.  This was not only one of the longest we selected, but also one of the most dreadful.

I’ll admit that we chose this because of the author.  We wanted to see what one of J.K. Rowlings’ books for adults would be like since we both enjoyed the Harry Potter series.  We weren’t expecting fantasy or anything of a similar vein, but we were expecting something … well…. something good.

It almost seems that in an attempt to really distance herself from her YA success, Rowling chose to go as far in the opposite direction as possible.  Instead of writing about people with promise and the desire to do something with their lives, this book is filled with people who are pathetic, lonely, and vindictive.  If you are familiar with the Potter series, imagine an entire book filled with people like the Dursley family – following them as they plot and plan their specious lives….  Yeah, that’s what it’s like.

And because she can, now that this isn’t for YA, the characters are driven by sex and filled with foul language.  Neither of these is disturbing to me, specifically, but it made each of the characters less likable and more disturbing, and really, I couldn’t identify or even care a whit about any of them.  Even Barry Fairbrother, who dies at the beginning and seemed to be much loved, becomes less likable as the story goes.

So the big question becomes … why?  Why are we reading about these people?  Why is their story being told?  I don’t have an answer.  Both my wife and I are bibliophiles and hate leaving a book unfinished, and so we pressed on, listening to this story, but each time we began a journey we’d start by saying, “I hope this book finishes soon! I’m tired of these people!”  And we knew, fairly early on, how it would end (which, not surprisingly, is not in anyway up-lifting).

Does a book need to be happy and uplifting?  No, of course not.  But there needs to be something to make us want to read it.  And for this book, the only thing that made us want to read it was the name of the author.  Well, that’s now been worn out!

Tom Hollander’s narration of the book is fine.  He has the British accent that seems important as they people are very clearly from a small U.K. village.  His reading doesn’t make the book any better, but I don’t think that’s through any fault of his.

Save yourself some time and energy (and a whole lot of depression) and skip this book.