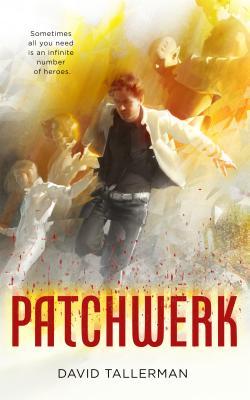 Dr. Dran Florrian is heading away from New York with a device he calls a “Palimpsest” – a device that is the culmination of five years hard work.  The Palimpsest is a machine that can reach into other realities and of course, that means it’s a device that is going to be wanted by some of the more unsavory types, specifically Harlan Dorric – a man who has already taken something very valuable from Dran.  And so Florrian is on the run.

What author David Tallerman has done with this book that makes this a bit more interesting than your average sci-fi thriller is that he weaves other realities into this story, and does so without warning.  Dran Florrian is also: D’ren Florein and Doran Floranov and Adwan Faizan .  There are no unique chapters with this other reality, the story simply changes the characters and setting, ever-so-slightly, mid-stream.

Sound confusing?  It is.  But Tallerman lays it out as straightforward as possible:

He had been shot…—but only in one single reality. There were many versions of him. Most were unhurt. Others were sick; some were long dead. A tiny few lived in realities where there existed nothing at all like the weapon Dori had wielded. And though he was Adwan Faizan, he was all of those other versions of himself as well, and all of them at once. Faizan was shot, but he was unhurt. He was dying, but elsewhere he lived. All possibilities were the same. All were within reach.
That was Palimpsest: a sinkhole through the reality stack; a tiny god in a room made of doors.

Think of this as a variation on the time-travel theme, but instead of time, we are traveling through alternate realities.  It’s a clever work and it takes more than a little focus from the reader to stay with the story and to figure out where the story is going and through which reality it is traveling. The savvy sci-fi reader should be able to figure this out.

I don’t know if it’s because Dran changed slightly through the various realities, but I was never able to really connect with him, which is really essential in a short work like this.  My reading found this interesting and moderately enjoyable, but I think a slightly longer work would have allowed for some character building that would have made this a tighter, stronger work.

Looking for a good book? Patchwerk, by David Tallerman, is wild sci-fi thriller that will have you a little confused, but is worthy of a read if you’re willing to work at it.