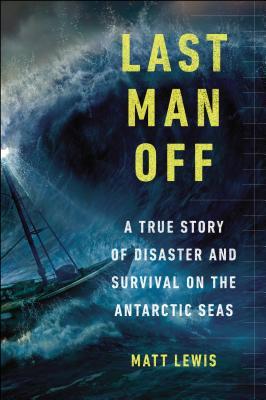 Twenty-three year old Matt Lewis is about to start a job that he’s been looking forward to … being a scientific observer aboard a fishing vessel in the Antarctic Sea.  But what he observes is that everything about the venture is unorganized and dangerous, and when the boat sinks and he has to fight for his life against the elements, the situation, and possibly against other crew members.  That he is only one of 17 survivors of 38 crew members, is a testament to his tenacity.

This book strikes me as a catharsis, a means by which survivor Matt Lewis has tried to come to terms with the experience he had aboard the Suldar Havid, a fishing vessel that would depart from Africa.

In essence, we know the outcome.  We know that Matt Lewis will survive a disaster at sea.  What we don’t know, the reason for us to read this (other than our human desire to rubber-neck at an accident) is to find out what happened and what kind of trial Lewis would have to over-come.

Lewis does a nice job of setting us up, detailing his experience and his excitement about venturing forth on a fishing vessel – something he hasn’t done.  He writes about a friend, also set to be an observer (essentially, someone whose job it is to make sure that the vessel’s crew are following maritime and marine regulations) – an odd position of authority and not a crew member.  He writes about watching his friend board a nice looking, modern ship while he waited another day or two before getting his assignment, and how his first reactions were certainly one of disappointment to see the beaten, battered, modified ship that was to be his own home.

Aboard the ship, Lewis tries to be neutral and simply be observant and comment on what he sees, but the reality is that this is nearly impossible.  Knowing the end result we do get a sense, through his writing voice, of things that might be suspicious or that might become troublesome.  But being young and in a new position on the boat … one which might easily be seen as invasive or as ‘the enemy’ … potentially has him being a bit more cautious and timid.

Interestingly, when Lewis writes of the storm and how it was handled by the captain of the ship, it appears obvious to me that the captain is ignoring safety protocols in favor of finishing ‘just one more’ fishing line.  That waves are flooding the holds is obvious to the captain, but that he ignored pleas to see the damage or that the pumps aren’t working, is less obvious, but still a factor.  And yet Lewis writes of the captain in favorable terms – though the writing itself has a hint of something else. (Something which we learn of at the end.)

The sinking of the ship is horrible, and the things that Lewis and some of his shipmates suffer through before the rescue is nightmarish. Walking or standing on the dead bodies of people you worked with, in below-freezing water, on a raft that is falling apart is, at best, a nightmare.  I can’t imagine revisiting this unless it’s exorcise the horror he’s live with since 1998.

I don’t want to belittle the events in this book, by any means.  The truth is, Matt Lewis is fortunate to be alive.  But the story here is not quite the thrilling life-or-death adventure story that it is billed as.  I recently read another story of struggle (In the Kingdom of Ice) that had me on the edge of my seat (metaphorically) with curiosity and concern for the men aboard ship.  I did not have that here.  Lewis is so close to the matter and the results of the past are still close at hand and he doesn’t allow us to build any empathy for any of the other people in the book.  Even Lewis doesn’t come off as entirely likable, though  we certainly connect with him the most given that he’s the one telling the story.  The person we next most connect with is ‘Boetie’, but for reasons that will become obvious to those who read the book, there are problems with our being attached to Boetie.

And perhaps it’s a case of our being too used to Hollywood movies, or in my case of recent reading, but a shipwreck survival tale meant to be gripping seems like something that the survivors should struggle through for days, weeks, months, even years before rescue.  This shipwreck happened and the rescue ships took three and a half to four hours to get to the location.  Yes, it was ice-cold seas, high waves, and by the time the rescuers were on scene, it was dark, making a search practically a miracle to pull off.  And no, I wouldn’t want to be in the flimsy raft for four hours, wondering if rescue would come, but the drama was not as intense as I expected (again, perhaps because it was not made as personal to me.

It is amazing what a person can go through and survive.  Matt Lewis’ story of survival after the sinking of a fishing vessel in the late 1990’s is incredible and clearly a means for Lewis to work out some of the issues he’s had with the events.  And it’s worth a read if you enjoy non-fiction and tales of struggle and survival.

Looking for a good book?  Last Man Off, by Matt Lewis, is the true, personal story of one man’s time aboard a fishing vessel in the Antarctic, its sudden sinking, and the man’s struggle to survive until rescue arrives.  It is a fair read.

Last Man Off: A True Story of Disaster and Survival on the Antarctic Seas