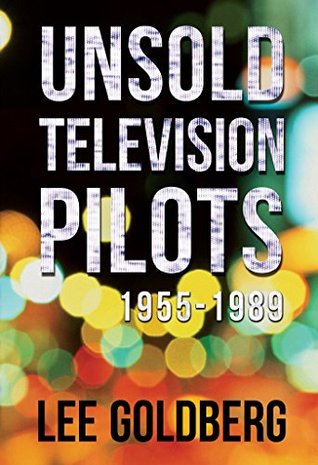 Unsold Television Pilots 1955-1989 is an expanded version of author Lee Goldberg’s book The Best TV Shows That Never Were (reviewed yesterday).  Yesterday’s book focused on, as the title suggests, the best shows that were never made.  This book is ALL the shows not made between 1955-1989.  It is not a simple read.  But it is fascinating!

This is a great peek at how Hollywood thinks.  Compare the shows that made it to these shows that didn’t even get past the pilot stage, and you can start to see what the Hollywood TV makers think of the television consumer.  But you can also look at some of these pilots and wonder what the heck ever made anyone think it might be a good idea.

The book is broken down into chronological order by year and within each year it is broken down by studio and type (comedy or drama).  There is a comprehensive list of producers, writers, and actors along with the general story plot for the pilot.  In some cases the intended story arc for the potential series is also presented.

For those of us with a fascination with television history, this is a gold mine.  Whether it’s seeing actor names like Harrison Ford in a pilot where James Farentino plays a defrocked priest (The Possessed, 1977) or Dwayne Hickman is the only male teacher in an elementary school (Hey Teacher, 1964); or writers like Earl Hamner (The Waltons) come up with ideas like that in which young veterinarians live in the mountains with a huge tiger and a pair of orangutans (Tiger, Tiger, 1969), this book is filled with little gems.

Although I read this chronologically, cover to cover, this is easily the sort of book that one could pick up and thumb through and look at any year. Any producer.

Though it has little useful information for daily use, for those of us who love trivia and pop culture and television, this book has so much to offer.

The down side is that it only goes up to 1989.  An entire generation (or even two) of television watchers won’t see the failed pilots from their viewing years.  But I can understand how much more difficult it gets as more and more networks begin producing their own shows.  And with companies such as Amazon and Netflix also making original programming, just keeping track of these things becomes more and more complicated.

This book is clearly a labor of love by author Lee Goldberg.  That he is a fan of the business, as well as an insider, is obvious.  I would like to have seen a little stronger hand in the proof-reading.  I recognize that there are a LOT of names in this 800+ page book, but there were times when the errors (not all of them typos) seemed a little too much.  Stor Trek instead of Star Trek is an example, and in a 1979 inclusion of The Return of the Mod Squad, character of Lincoln (‘Linc”) Hayes is twice referred to as “Line” Hayes.  Note that my copy of the book was an advance reading copy and that perhaps some corrections were made before publishing.

All in all, I really like this book and will most certainly reference it in the future.

Looking for a good book? Unsold Television Pilots: 1955-1989 by Lee Goldberg is a great look at pop history from a point of view that we don’t often see … the things that don’t make it to the public eye.