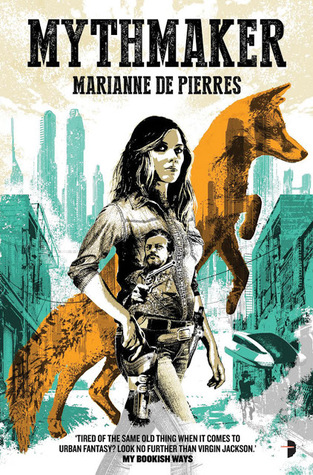 About two years ago I was really thrilled to have read/reviewed Marianne de Pierres’ book, Peacemaker.  Mythmaker is the second book in the Peacemaker series and I was really looking forward to it.  I wrote then about how excited I was to find a novel that crossed so many genres and had such an original premise.  That hasn’t changed.

Picking up where the last book left off, Virgin Jackson is facing a murder rap and is being blackmailed into working with a secret, subversive (?) organization called GJIC (the Global Joint Intelligence Commission).  The head of the GJIC is her own mother, whom she had thought dead.  The Mythos (creatures from another world) sightings are increasing with Birrimun Park (where Virgin is a ranger) being their prime location.  Virgin’s brother appears to be stirring up trouble between some human factions.  Her best friend Caro is up to something. Her new partner Nate Sixkiller  takes a little bit of a back seat in this adventure, while Hamish steps it up.  All around her things seem to be getting out of control and Virgin clings to any bit of humanity left, while stepping up her game in confronting everything head on.

Just as with the last book, the action here comes fast and furious and is always surrounding Virgin, meaning she moves from one hot-spot to another, and in nearly every instance it’s a very heightened issue and each instance barely gives Virgin (or the reader) a chance to breathe.  And yet … nothing really happens.

One moment (or extended series of moments) that felt the most connected was when Virgin needed to step into the middle of a potential gang war and talk both sides out of it, trying to convince them that the responsible party for a previous action was not either side, but an outside party.  Because the gang threats were escalating, the army begins to move in, shooting first and fire is spreading throughout the area.  Virgin takes the time and risks her life to evacuate a young boy and his infant sister (knowing that their mother is already dead).  This is a nice, albeit strange moment.  Is this simply Virgin’s attempt to hold onto something resembling humanity within everything that’s going on around her, or will this boy play a part in the story later? It’s a nice moment, but a strange one, given everything else that happens.

I still like the world that Marianne de Pierres has created and I was really looking forward to getting more into the Mythos and sorting out the relationships between the gangs and GJIC.  The closest we come is when someone from a gang sees Virgin’s spirit animal (which is otherwise not present in this book). Otherwise, this was quite disappointing.

I really don’t like when a publisher/author puts out a book that isn’t a book.  Just because it has a lot of pages and actions doesn’t make it a story.  A story needs a beginning a middle and an end.  This has only ‘middle.’  This book should either have been split up with parts going to the first and the next book, or the entire series should have been one book.

There is a time and a place for serial story-telling.  If this were a 100-page novella in e-book format or even in low-cost paperback format I would be slightly more forgiving, but for a 300+ page book at full price for a story that only adds to the questions and solves none…?  I can’t recommend that.

I give this a moderately decent rating (2.5, which will round up to 3 on Goodreads and Amazon), and I will look forward to the third book, because I like the characters and the world and de Pierres’ writing, and I do want to find out how it all works together (and I really want to know more about the Mythos and the spirit animals!), but I don’t appreciate being strung along this way.  At least give me a resolved sub-plot to tide me over!

Looking for a good book?  Mythmaker, by Marianne de Pierres, is the second in her innovative and thrilling “Peacemaker” series, but the book is mostly filler to bridge the gap between the first book and what is still to come.  If you are okay with that, and have read the first book, you’ll enjoy this one.  If you haven’t read the first book, or you don’t like stories without end, then you’ll want to wait for the series to be completed.