PIRATES OF THE TIMESTREAM – Steve White 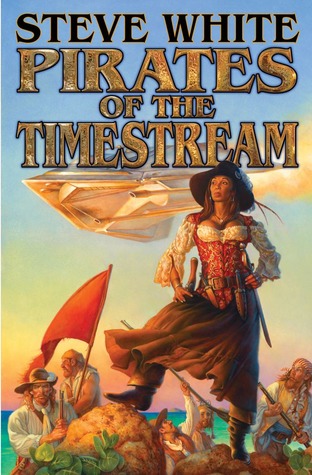 I have not previously read anything by Steve White, which means I have not read the two previous books in this series.  I don’t feel that I needed anything else to set this book up, as White does a fine job of letting the reader know what we need to know through the course of the book.

But with that said, I have to admit that I was not very captivated with this book.  However, it may have as much to do with my perception of what the book was about and what the author was wanting to do.

My expectation was that this was going to be some serious, bad-ass sci-fi fantasy with some mind-boggling time continuum issues.  Let me quote a little from the Goodreads description of the book:

Special operations officer Jason Thanou of the Temporal Regulatory Authority must once again plunge into Old Earth’s blood-drenched past to combat the plots of the Transhumanist underground to subvert that past and create a secret history leading up to the fulfillment of their mad dream of transforming humanity into a race of gods and monsters.

…  To Jason’s horror, he also learns that the Teloi aliens who were the grim reality behind the pagan pantheons of antiquity … are still active, and aiding the Transhumanists in founding an unspeakable cult. What’s more, these are a different—and far more dangerous—breed of Teloi than before.

Jason must somehow thwart the plans of the sinister allies while at the same time preventing reality itself from falling into chaos.

Intense, right?  But in the reading of this book, the intensity and excitement as described doesn’t come across.  Instead this reads as a bit of light-weight, fluffy novel.

I also have to admit that I have a problem with how we tend to romanticize pirates.  He we are, traveling back to the 17th century and carousing with pirates (pirates of the Caribbean, no less) and it comes across as fun and funny.  But we have to remember that pirates were a very violent group.  People were terrified to run into them.  Can we imagine a day in the future when people are writing about those ‘wacky Muslim extremists who blow themselves up while try to create havoc and terror’?  I hope not, but I’m sure the day will come.

I have, though, read plenty of fiction about pirates (reviewed a book within the last two or three months that featured pirates from the same era), so it’s not an issue that prevents me from enjoying a well-written work.  Unfortunately, the story just didn’t live up to the plot.

Looking for a good book?  Pirates of the Timestream, by Steve White, has some really interesting ideas and the potential for a thrilling sci-fi adventure, but instead is a quick, light read.

Pirates of the Timestream

series: Blood of the Heroes #3