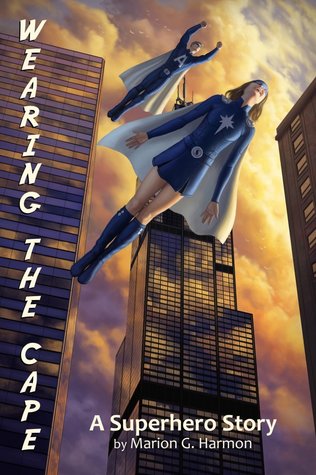 In a world where superheroes have agents and become celebrities just for having powers, it’s not unusual for a child to grow up wanting to be a superhero.  That’s how Hope grew up, and when she was entering her freshman year in college her powers appeared.  Now she’s invited to join The Sentinels – a Chicago-based superhero team – as Astra (her superhero name).  But does she really want to be a superhero, with all the dangers inherent in such a life, and living in the fear of having her real identity revealed?  She agrees to being a side-kick for a little while, to try to understand what the life will be like, but the villain from her first superhero encounter is seeking her out.

This book is part of my “super-hero” fiction collection that I seemed to collect all at once a little while back.  And with almost 500 books in Kindle queue, mostly ARCs, it just got pushed to the back for a bit because I’m often leery about self-, or small-press publications.  I needn’t have worried though, as this is a nicely written, strong work.

It seems fairly clear to me that this book is targeted at the YA market.  The protagonist, Astra, is a teenager.  She is filled with questions, longing, and the requisite pathos.  These are traits common in YA books as they speak to the mood and angst so many young adults are feeling.  But what I appreciate so much about this book is the positive turn(s) Astra takes and the goals that are heroes aspire to.  These are heroes, after all.  Super heroes.

The story moves along nicely and there’s really much, much more here than simple villain-fighting  or world-saving.  There is a story about people, who happen to have powers, and people stories tend to be more interesting, in my book.

This is definitely worth reading, and I see that there’s a follow-up book, which I look forward to reading as well.

Looking for a good book?  Wearing the Cape is a strong YA story by Marion G. Harmon, using super heroes and super powers as a backdrop to tell a story about human desire.