THE RICH ARE DIFFERENT – Chris Orcutt 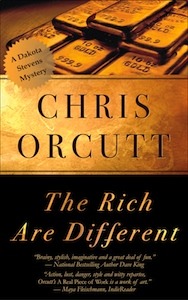 For reasons I won’t go into (because they aren’t interesting), I am reading the Dakota Stevens books in reverse order.  I read and reviewed the third book back in May (see that review here) and I hope to read the first book in the series soon.  I’ve been reading a number of new mysteries lately and I think it’s safe to say that Chris Orcutt’s  A Dakota Stevens Mystery series is one of my favorites (and there are a number of quality series’ out there!).

Although I do have a little better idea where some of the relationships are going (having read the third book), I still found it fun to read about and watch these relationships grow.  It is Dakota Stevens and his sometimes partner Svetlana Krüsh that make this book and series really work.

Dakota is a classic tough-guy private investigator, with a good deal of smarts and ethics.  He’s ex-FBI. He reminds me a bit of the Robert Urich ‘Spenser’ but a little rougher around the edges. Dakota’s cohort, Svetlana, who gives off the impression that she could take or leave the PI game whenever she feels like it, is a beautiful Russian who happens to be a chess grandmaster.  It is never clear quite why Svetlana sticks around to help (and often as not, save) Dakota, but that’s a big part of her charm and why we like her so much.

We start with Dakota feeling a bit glum.  His previous case took a lot out of him (I can’t wait to read about it!) and he’s lost some of his confidence.  Along comes a wealthy socialite who wants Dakota to investigate her brother’s death.  His death was determined to be a suicide, but the sister is convinced there’s more to it.  The brother, Sidney, was obsessed with the Old West and bought a large ranch in Montana and staffed it with actors to keep an Old West theme alive for visitors.

Dakota agrees to go undercover as an actor playing the role of the new marshal in town while Svetlana will go as a guest to the ranch.  During the course of his investigation, Dakota realizes that the marshal is not a beloved character and that some of the actors carry their roles a little too far.  He also learns that the neighboring land, owned by a Native American group have no love lost for Sidney or his ranch.  In fact, it appears that there are any number of people who wouldn’t have minded seeing Sidney gone.  But there are aspects to the case that confound Dakota.

I’ve become a big fan of Dakota Stevens and Svetlana Krüsh and I look forward to reading their first adventure and any subsequent tale that Chris Orcutt shares.  This book doesn’t have the energy and thrills that I found in book 3, but it does have a solid mystery and fantastic characters.  It really does feel like you are right there with Dakota, looking over his shoulder during the entire adventure.  This is remarkable writing when it can draw the reader in the way Orcutt does.

Chris Orcutt is a writer who deserves a large reading audience and the Dakota Stevens Mystery series needs to be read by anyone who enjoys a good mystery.  I think we’ll see Dakota Stevens on-screen in the not-too distant future.

Looking for a good book?  The Rich Are Different by Chris Orcutt, is a strong mystery, big on story and characters, that will have you wanting to read more Dakota Stevens’ stories!

I received a copy of the book from Smith Publicity in exchange for an honest review.

The Rich Are Different

publisher: Have Pen, Will Travel