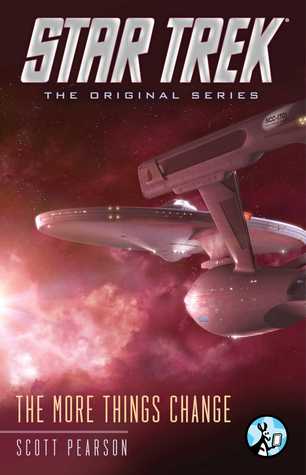 This Star Trek: The Original Series novella is part of ‘new’ e-book-only publishing that is probably very good for the Star Trek franchise.  It keeps fresh stories coming, keeping the interest in Star Trek alive, but because Pocket doesn’t have to spend a lot of money on printing and shipping costs it makes financial sense.  For me, as a long-time Trekkie, I just appreciate having the new stories of beloved characters available.

This story takes place shortly after Star Trek: The Motion Picture as Spock and Doctor Christine Chapel are aboard a shuttlecraft, transporting a Trill ( a species that we didn’t see until the Deep Space Nine series) when the Trill shows signs of a strange illness, and the shuttlecraft comes under attack.  Spock needs to perform some necessary repairs to the ship in order to continue evading the other ship.  When he is injured during the repairs, Nurse…er…DOCTOR Chapel has to take care of two patients, and keep the shuttlecraft operating.

It’s a pretty simple story. exploring, just slightly, the relationship between Chapel and Spock, though I don’t feel the reader learned anything new from either party about their pasts.  What we did learn was a little more about the characters and their motivations for how they would continue with their Star Fleet careers … what choices they would make about where and how best to serve.  This is particularly informative and helpful with Chapel’s character.

This isn’t quite a “Mary Sue” type story.  A “Mary Sue” is (according to Karen Hellekson, editor of The Fan Fiction Studies Reader):

a genre of fan fiction story featuring a young, attractive central female heroine who is exceptional in every respect. It is the ultimate self-insertion: in the Mary Sue, the author projects herself into her fandom’s world, where, beloved by all, she gets to interact with all her favorite characters and save the day.

Since Chapel is a previously established character in the television series the “Mary Sue” description doesn’t quite apply, but most of the other respect Chapel acts the “Mary Sue” part (“exceptional in every respect” and manages to “save the day”).  Because of this, the story had very much the fan-fiction feel to it.  (Though I suppose most Star Trek books are essentially fan fiction.)

The plot is pretty generic: Shuttlecraft transporting dignitary is in trouble.  Dignitary needs emergency medical attention.  One character must step up and be the hero in all respects.

If this were not a Star Trek story, would it sell?  Probably not.   But it IS a Star Trek story, and we do get a little more info about the characters, which should make this an enjoyable read for most ST fans.  It’s too bad we don’t get more information about the Trill.  This suggests that this is one of the first encounters with the Trill (which is why Chapel has a difficult time attending to it/them, medically), but for all the time cooped up in the shuttlecraft, we don’t learn anything about this new life-form.

Looking for a good book?  If you’re a Star Trek fan, this novella, The More Things Change, by Scott Pearson, should be a nice addition to your Kindle or Nook.