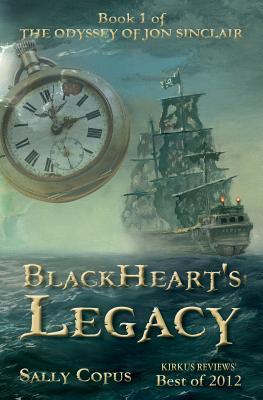 The success of the children’s/YA Harry Potter series has done a great deal to bring attention to the children’s book market, and I’ve seen an incredible amount of YA fantasy and science fiction over the years.  But what if you aren’t interested in reading about witches and spells and the like?  Is there still material out there for the YA/child reader?  Yes.

Jon Sinclair and his grandmother take a time machine journey back to 1692 in Jamaica.  Jon goes exploring while his grandmother looks to find a way to get the time machine to return them to their own time (2010), but in doing so, he is quickly captured by pirates.  Thus begins an adventure in which the grandmother disguises herself as a boy named Gram as she looks to get Jon out of the clutches of BlackHeart the Pirate and back to the time machine.  Meanwhile, back in 2010, Jon’s grandfather is also working hard to fix the problem with the time machine because he knows there will be a devastating earthquake to hit Jamaica in 1692.

Copus has written a very easy-to-read tale that is reminiscent of the Magic Tree House books in which a youngster gets to explore history through first-hand experience.  She is able to expand on her tale, though, and develop some of the historical figures and add a little more depth to the story itself.  This is not first and foremost a historical tale.  It is a fiction story utilizing some well-researched history of the time and location.

I mentioned “easy-to-read” and “Magic Tree House” and I think both are accurate.  This DOES read a lot like the Treehouse books, except that the story goes on much longer.  I’m not entirely sure what age group this book is most suited for.  The reading level is much below the Potter series, but the developing story is much above the average Treehouse series.  This fits a pretty narrow gap in between.

Also, while the era seems well-researched (I’m by no means an authority on 1692 Jamaica), I’m a bit taken aback at the pleasant nature of the pirates that we meet.  Blood-thirsty killers looking to steal but are treated as gentlemen who take in Jon and Gram to work for them (but not as slaves)?  It’s a very generous look at historically ruthless criminals.

I was struck by how nice everyone was throughout the book.  This can certainly be a very redeeming quality in a book for children, but I again wonder what age group this is for.  Thinking back to my own children, when they were younger, might have enjoyed this, but would not have wanted to read it themselves.  It’s the sort of adventure book, not unlike Treasure Island or Swiss Family Robinson, that I would have read aloud at bedtime … a chapter or two a night.  There are some nice discussion opportunities to have with the children in this scenario.

I am very curious as to what happens in the follow-up book as we’re left dangling slightly, though this particular story wraps up well.

Looking for a good book?  BlackHeart’s Legacy is a very polite, well-mannered historical adventure book for the advanced-child reader or the parent looking to read a story book to children at night, but a story that won’t likely cause nightmares.

series: The Odyssey of Jon Sinclair #1