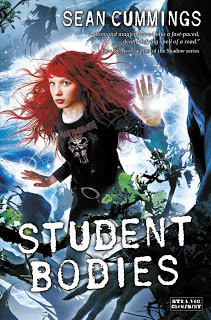 Somehow I’ve been getting in to the middle of series’ lately.  Student Bodies, by Sean Cummings, is the second book in a series, though I did not know that when I started reading (sometimes I find it more enjoyable to pick up a book and just start reading, rather than researching the book first, and I did not see anything on the cover to indicate that it was a ‘second’ book).  I am very happy to report that this book stands alone as an individual story but that you’ll probably want to go read others after finishing this.

Student Bodies is a YA book that should have a lot of appeal to the teen and tween readers who enjoy urban fantasy.

In this book, teenager Julie Richardson is a young witch who has recently become part of the Shadowcull, an organization of witches.  Julie’s mother is also a witch (hence her own powers).  In a number of books of this ilk that I’ve read recently, the youngsters is grasping at her own powers, but here Julie seems pretty comfortable, confident even, with her abilities, which is a really nice change.

What does give Julie pause is school, and the fact that she has finally found ‘true love.’  But that means she has to defend her choice to have a boyfriend against the other witches because, she is warned, her true love will be used against her by the forces of evil.  But Julie has confidence in her powers and her ability to ward off evil and protect her boyfriend.  Ah, youth.

Author Sean Cummings captures the cocky, confident teenager quite well, and it is so nice not to have another simpering, “I-can’t-do-this” fop for a heroine.  He moves the story along nicely, and we are as surprised as Julie to learn some secrets about her father, and face off against a powerful force as the book moves to its climax.

This is precisely the sort of book that the more confident YA readers will enjoy … those (usually female) who identified with Hermoine in that other YA series that was pretty popular.

I hope that I can find more of Sean Cummings work in the future!

Looking for a good book?  Student Bodies is a powerful YA fantasy that should be devoured by younger readers.