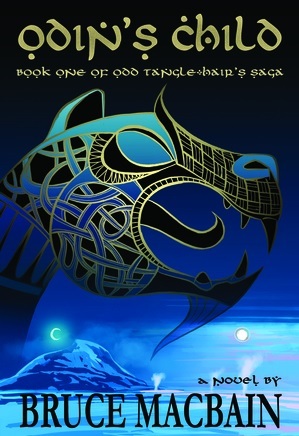 Ever since I did some research on Norse mythology for a project I wrote many years ago, I have been fascinated by the Scandinavian legends and mythology and history (it happens that this is my genealogical background, as well).  And while there have been adventure stories based on the Norse gods, I am not aware of much literature that looks at the history in a fiction format.  But now there is Bruce MacBain’s ‘Odd Tangle-Hair Saga’ and it is brilliant.

Odin’s Child is the first book in MacBain’s saga and I will admit that while it caught my attention (and hence my request for a review copy), I was a little less than anxious to delve in to a re-telling of a Norse god story, because the Edda’s by Snorri Sturluson are awfully good and don’t really need a re-telling.  After all, what else would this be, being called Odin’s Child?

But this is NOT a retelling of the stories of the Viking gods.  This is a well-researched historical fiction story of a young man, Odd, who is experiencing the transition of the worship of the old Norse gods to the new Christian god.  He is a wanderer, a Viking, who experiences battles and imprisonment, friendships, expected and unusual, and the loss of friends.  He is a story-teller, in the grand tradition, but he is also a fighter and ship’s captain.  He is a leader who is faithful to his followers.

This book relies on our attachment to the narrator, Odd Tangle-Hair, and fortunately MacBain has created a young man who is completely engaging while being appropriately modest and favored with fortune (he is, after all, Odin’s child). We really do want him to succeed, given his treacherous beginnings, and like Einar and Stig and Glum, we’ll follow and support him.

Due to the number of books I read and review, I set reading goals for myself — number of pages and/or chapters — and I regularly exceed my goals with Odin’s Child because I kept wanting to read just a little more each time.  That’s always a mark of a good book for me.

If I were to make one complaint, it is that we do seem to move from one ‘incident’ to another, always putting Odd on edge and having to deal with something crucial.  This is definitely in line with the Edda’s and mythology story-telling, but in this context, I wouldn’t have minded just a few more peeks at what a ‘typical’ day might have been like for Odd and his Viking friends.  (And while I really like the beautiful cover as seen above, can anyone explain to me why the moon on the cover is dark on the side that faces the sun?)

I truly enjoyed this entire book, but I can say that I was most definitely hooked in the scene when Odd befriended Glum.  You will have to read this book to understand who and what Glum is, and why this scene was so special.

I highly recommend this book.  I can not wait for the next volume in the saga.

Looking for a good book?  You’ve found one if you’ve picked up Odin’s Child by Bruce MacBain.  This is a must read.

I received an ARC of this book from the publicist in exchange for an honest review.