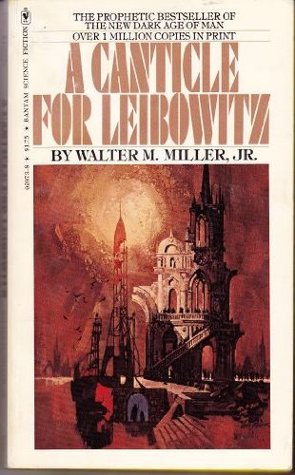 I first read this book back in 1977 when an English teacher of mine, knowing that I enjoyed sci-fi, put a copy of this book on my desk and suggested that if I really liked science fiction then I would love this book.  It was an award winner, after all.  A month or two later and I brought the book back and I could see in his face he wanted to know how much I loved it, and I smiled and said it was good, but the truth was, I didn’t understand a single bit of it or why anyone would like it.

But because I liked that teacher, this book has stuck with me, and I decided to give it another try.

I definitely understood the book much, MUCH better than I did when I was sixteen … found humor that I never would have picked up on at the time … but I still found the book to be dull and mostly very uninteresting.

I don’t think I realized, even with this reading, that the book isn’t about any specific character or characters but rather about an idea.  And because it’s about an idea, it traverses the lives of a number of people.  As I would gain an interest and be curious about specifics or characters and their actions, it would move on to another story.

In classic 1960’s tradition, this book is about ideology.  It is a commentary on the role and tradition of religion in society and it capitalizes on the fears (of the times, mostly) of nuclear holocaust.

The role of religion seems to be to give people something to cling to, something to hold on to, especially when everything seems bleakest.  Yet somehow, in this book, religion is the keeper of science and technology in a perverted sense that they don’t quite understand what it is they are holding dear.  This doesn’t make sense to me.

I’ve given this book two chances … more than most books will get, and it still fails to interest or enlighten or entertain.

Looking for a good book?  Not everything that’s a ‘classic’ or an award winner is worth reading.

A Canticle for Leibowitz

One comment on “A CANTICLE FOR LEIBOWITZ – Walter M. Miller, Jr.”