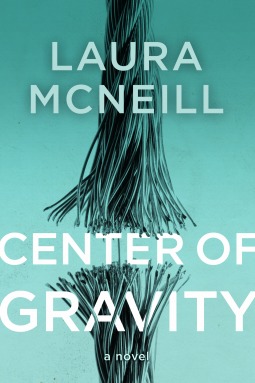 I love getting a book by an author with whom I am unfamiliar and then being taken completely by surprise in such a good way.  Center of Gravity by Laura McNeill is one of those books for me.

I read the book in the span of one day-light day.  The action of the book moves very fast.  The story is told through the view-point of many different people, each telling a portion of the story in short, almost diary-like snippets.  The center of attention is Jack, and eight-year-old who fantasizes about being a superhero like those in the comic books he reads.  Jack’s mother Ava tells part of the story, as does Mitchell, Jack’s father.  There is also Lucy, the court-appointed doctor assessing the behavior and needs of Jack and his younger brother Sam.  And there is also Graham, Ava’s attorney.

Mitchell is a powerful man who is well-respected in the community.  When Mitchell becomes convinced that Ava is seeing another man, he files for divorce and custody of the boys and sets the entire community against Ava so fast that she hardly knows what is happening, and so begins a frantic, frenetic fight for Ava to hold on to her children.  Mitchell, meanwhile, is clever and cunning and sets trap after trap for Ava, destroying her reputation and surrounding her with doubt, turning her into a virtual pariah in a matter of hours.  Only her attorney, Graham, seems to have confidence in Ava, and Jack’s association with Lucy might be the only thing that offers any hope.

Thinking on it, I realize that this story seems very familiar.  Almost too common of a plot, but author McNeill gets by with it by keeping the action moving swiftly and by creating characters that are real and (where appropriate) likable.  The tension is thick and, like the cover as seen here, it is as if a rope were fraying, thread by careful thread.

I have to admit that one of the few things that will get me upset is when good people become are so gullible that they will believe the stories that the smiling evil tells.  Twice I got so upset with the action in this book that I came very close to putting the book down.  In some ways this is actually a compliment to the writing as it was clearly strong enough to give me such a powerful (though negative [to me]) reaction.

The eight-year-old Jack is a tremendous character.  McNeill latches on to the superhero theme which is very appropriate for a boy his age and dealing with the troubles he has.  Tossing in the pop culture, superhero references, and knowing what the various superhero powers are (from Spiderman to Green Lantern, Thor to Daredevil) help McNeill keep this story ‘real’.  Jack has moments when he either wishes to emulate the comic book heroes or hopes they might come to his rescue.  We as the reader understand and empathize with Jack.

This is a great summer, beach read.  It is a thriller that races and will take your breath away.  I look forward to reading more by Laure McNeill.

Looking for a good book?  Center of Gravity, by Laura McNeill, is an edge-of-your-seat thriller that will have you holding your breath and turning the pages as quickly as you can to keep pace with the story.

I received an Advance Reader’s Copy of this book from the publisher in exchange for an honest review.