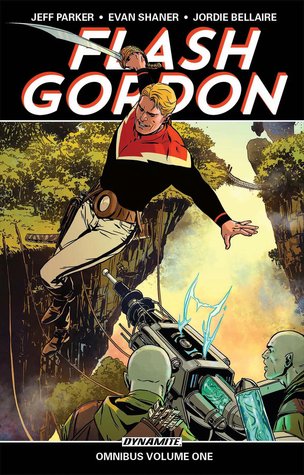 There has long been a special place on my bookshelves for Flash Gordon.  I can still recall my introduction to Flash … when I ordered one of the first books by Alex Raymond through one of the book clubs in school.  I was already interested in science fiction by then, but I hadn’t read anything as action-oriented as Flash Gordon.  Shortly after reading my first Flash Gordon, a movie house opened in my town that only showed old, black and white movies, and they started each film with an episode of a serial and the first serials I watched were … yes, you guessed it … the Flash Gordon serials.

All of this preamble as a means to say that I was more than just a little excited to revisit this one-time hero of mine, and he hasn’t changed much over the course of forty years (forty for me).

This graphic novel re-boots the hero somewhat, trying to give him a more modern edge, but frankly, if it weren’t for the very first page, in which reporter Dale Arden is covering a story about the decommissioning of the space shuttle, I really wouldn’t have any idea what time frame this was set in.  Perhaps this shows that the Flash Gordon stories really are pretty timeless.  Or perhaps it shows that the author didn’t do enough to ‘modernize’ the character.

The story is classic Flash Gordon.  After a brief introduction to the trio we jump into the story with Flash, Dale, and Professor Zarkov in their rocketship, low on fuel, and attempting to escape the planet Mongo and its emperor, Ming the Merciless.  Their flight leads them to other planets under Ming/Mongo’s control where Flash and crew have to look for allies while avoiding capture.  This is classic Flash Gordon serial story-telling.

The art is solid and also has a throw-back quality to the earlier days of comic book art (though much more colorful).  More importantly, perhaps, given some of the recent graphic novels I’ve reviewed, the females are not overly proportioned so as to be nothing more than sexual objects.  Flash is athletic and fit, but he’s not appearing like an over-ripped gladiator or superhero.  This is art that supports the story-telling, as I think graphic novels should have.

This was a fun nostalgic trip and I enjoyed it for what it was.  I would share it with my teenage boys (with the caveat that this was the sort of stories I read when I was their age), but it’s not earth-shattering (pun intended) or overtly memorable.  It is Flash Gordon and it is solid escapist sci-fi adventure.

Looking for a good book?  The Flash Gordon Omnibus graphic novel might not reach too many new readers, but it has strong appeal to those of us who grew up with the Flash Gordon stories, comic strips, and serial films.

I received a digital edition of this book from the publisher, through Netgalley, in exchange for an honest review.