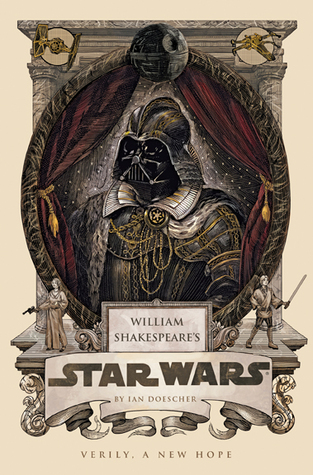 Apparently I’m not the only sci-fi geek who also happens to really like (and work professionally in) theatre.  Author Ian Doescher must also have similar interests, to have chosen to re-tell the Star Wars  (“A New Hope”) story in iambic pentameter ala William Shakespeare.

The story, of course, is George Lucas’ story and the dialog is also, mostly George Lucas’ dialog, with some clever conversion on Ian Doescher’s part. I’ll state right out that I didn’t read this, but listened to it from Audible, and the cast reading the different parts really helped energize the production. (And I’ll also say that plays aren’t really meant to be read but seen [or heard], and generally only read (well) by those accustomed to reading plays.)

What works with this is Lucas’ story, told in iambic pentameter, and, as Doescher states in his Afterword, Lucas’ story is modeled quite perfectly on the mythological hero archetype, and there are many similarities with the characters and relationships with those found in Shakespearean drama.  So…a modern mythological play told in Shakespearean style seems like a pretty good fit.

I also like the inclusion of the Chorus to describe some of the action and transitions.  I wondered how that might be handled, and a Chorus is absolutely the right answer.

What doesn’t work is Doescher’s attempts to be clever.  To have some familiar soliloquies that are pulled from Shakespeare, delivered by Lucas’ characters was just a bit too contrived and took away from the story (in my mind).  For instance:

LUKE:  Once more unto the trench, dear friends, once more!
The death of our dear friends we see today,
And by my troth their souls shall be aveng’d!
I was not angry since I came to space
Until this instant! Strike at us and thou
Shalt know the power of the Force, thou brute,
Thou Empire full of hate and evil deeds.

LUKE: Friends, rebels, starfighters, lend me your ears.
Wish not we had a single fighter more,
If we are mark’d to die, we are enough
To make our planets proud.

And the one that caught my attention and had me groan first:

LUKE: Alas, poor stormtrooper, I knew ye not,
Yet have I ta’en both uniform and life
From thee. What manner of a man wert thou?
A man of inf’nite jest or cruelty?

While Doescher weaves these in nicely, they weren’t necessary (though I suppose it was these that made this Shakespeare’s Star Wars).  But truthfully, I’d rather Doescher spent a little more time understanding the period and the language and not just add in a bunch of ‘thee’ and ‘thou’ to make it sound  ‘Shakespearean.’  This is what high school and college kids do to make something sound Shakespearean and to sound like a character in a Renaissance Festival.

But…did I enjoy this?  Absolutely.  I’d love to see this staged … which is the best compliment you can give to a script.

Looking for a good book?  Shakespeare’s Star Wars is a fun read that fans of science fiction and theatre will really enjoy.