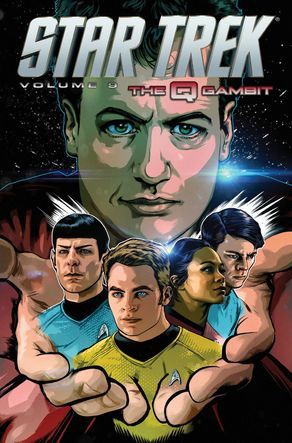 Let me start off by saying that I am NOT a fan of the character “Q.”  Not only not a fan, but I get seriously annoyed by the character and have yet to watch any rerun of the series that has this character in it.  I’m not quite sure where this distaste for the character comes from, but it’s there and I’m copping to it outright.

That said, this book did not start off well for me.  Perhaps it’s not just the character of “Q” but the relationship between Q and Picard that I am annoyed by, but in any event, the early portion of the book with Q popping onto the Enterprise and interacting with Picard almost had me stop reading.  I’m glad, however, that  continued.

This story, by Mike Johnson, takes on a heavy concept of alternative time-lines and time travel.  Flinging Kirk and the Enterprise (of the re-booted movies) into the future, Q doesn’t reveal too much to Kirk and crew, but readers/fans recognize that this future is very different from the one we are familiar with, of DS9 fame.  I thought this to be kind of an interesting concept, to play with fan familiarity.  It might be confusing to anyone not already with the Star Trek universe, but, really, how many people are going to read this comic/graphic novel if they aren’t already familiar with the ST universe?

Kirk’s fame for not believing in the no-win scenario is put to the test in this alternative future, and Q’s place in the universe is brought in to play in the strongest of ways.

I don’t want to give too  much away, and with a plot as intricate as this one, it’s difficult to talk too much about the story without giving much away.  The stakes are high (which makes for great drama), the characters strong, and the obstacles seemingly insurmountable.  What more can you want?  The deeper I got in to the book, the more interested I became and it almost … almost … got me to become a fan of the character of Q.

The art by Tony Shasteen is very passable.  I was never disturbed by the art, but I wasn’t overwhelmed with awe by it either.  It sufficed to tell the story, visually.

I am glad when I can be ‘converted’ by a book.  I was not expecting to enjoy this too much, given my feelings about one of the main characters of the story, but I came away from it very glad to have experienced this story.

Looking for a good book?  Star Trek fans should really enjoy digging in to this graphic novel that offers tremendous excitement with the stakes incredibly high.