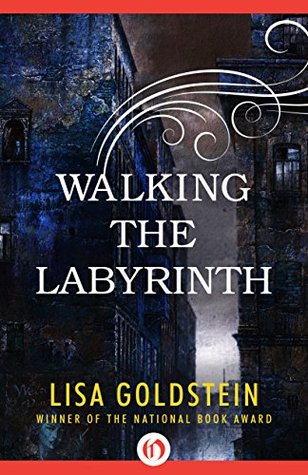 Walking a labyrinth is intended as a spiritual journey to center one’s self, to right what is out of balance internally, or a means of rediscovery.  In Lisa Goldstein’s book, Walking the Labyrinth, the labyrinthine journey is made by Molly Travers, a private investigator who is slowly revealing some truths about her family history.

The Allalie Family were a performing family with a slightly supernatural power.  This power is not well-defined other than that it gave the family an edge that other performers didn’t have.

The story:  A reporter sits backstage with the head of the Allalie clan, Callan, after a vaudeville performance of their magic act.  During the interview, sisters Fentrice and Thorne dazzle the reporter with tricks so unusual he isn’t even sure he can believe what he saw.  Some sixty years later, Molly, the youngest living descendant of the Allalie family (raised by her aunt Fentrice) is approached by a private investigator who is asking about one of the Allalie sister who seems to have gone missing shortly after that above-mentioned performance.

Molly begins her own investigation, which leads her to a highly secretive society, The Order of the Labyrinth, and family secrets that come as a surprise, even to the reader.

Author Lisa Goldstein does a very nice job of setting up a mystery with a hint of paranormal, and weaves the back story of the Allalie family in very well.  She has created very real characters.

This is not an ‘active’ book with lots of action.  In fact, when there are moments of action (stealing a book, for example), the story slows down.  Instead this is a book with a lot of allegory.  I would admit that going in to a book about ‘walking the labyrinth’ and discovering an ‘Order of the Labyrinth,’ I expected some kind of labyrinthine action, but the labyrinths here are internal, or metaphorical.  I actually like allegory and metaphors in my fiction, but sometimes this does creep just a bit slowly.

Looking for a good book?  Walking the Labyrinth, by Lisa Goldstein, is a novel of a family that spans decades of family mystery, and introduces a modern PI to some of her own family secrets.

I received a free digital copy of this book from the publisher, through Netgalley, in exchange for an honest review.