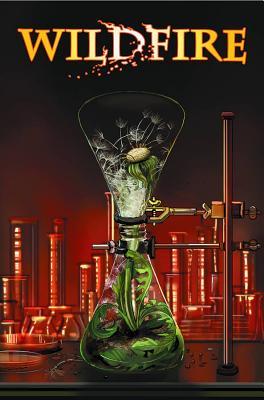 There are a great number of similarities between a graphic novel story and a story written for other visual mediums such as film and theatre.  Now I don’t know a lot about film, but I do know a little something about theatre and playwriting.  I have, taped above my desk, a series of “I believe…” quotes from one of my favorite playwriting books.  Those quotes include:

And because I recognize the similarities between graphic novels and theatre scripts, I tend to hold graphic novel stories to the same standards as a play script.  In the case of Wildfire, written by Matt Hawkins, the story holds up very well and although sci-fi it holds such an incredible foothold in reality that it is a little scary.

If you lived in farm country, or have ever driven by a sizeable farm, you’ve seen the signs from laboratories that are providing the farmers with fertilizers or pest controls (or both).  Wildfire imagines if some laboratory is experimenting with a special growth hormone for food to rapidly speed up the growth process in order to plant and harvest on a much quicker scale in order to be able to plant and harvest more food to feed our too-rapidly growing population.

But what happens if that hormone spreads to the crops that we DON’T want?  Dandelions.  Poison ivy.  Poison oak.  Crab grass.  Etc etc etc.  We can sometimes become so focussed on a goal that we fail to see the other, dangerous, possibilities.

Hawkins’ story moves quickly and is full of characters ‘who want and need to act.’  We don’t spend a lot of time sitting around and contemplating the effects, as writers often like to do — debate the pros and cons — but we jump right in to goals and obstacles with a lot of dramatic tension and suspense.

In case you can’t tell … I really like this story.  It’s well paced (if anything…it’s a touch too fast) and extremely topical.

The art, by Linda Sejic, works nicely for the book.  It is not the super-realistic, 3D style of many books, but much more like the comic book art of the 1970’s and ’80’s.  And for someone like myself, who grew up with those books, it was very comfortable.

Looking for a good book?  Wildfire, Volume 1 is a graphic novel that works well on many levels and should appeal to readers who’ve never read a graphic novel before as well as fans of the genre.

I received an electronic version of this book from the publisher, through Netgalley, in exchange for an honest review.