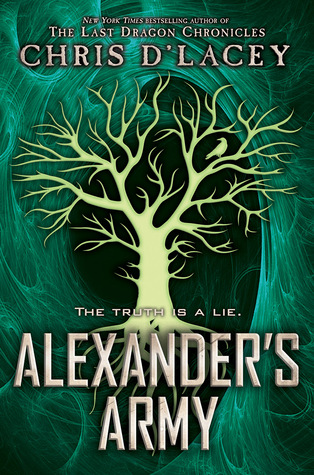 Back in May I reviewed the first book in the UFiles series by Chris d’Lacey, and was quite spellbound with the book.  I was fortunate enough to see that book two was now available for review and eagerly began to read.

There is still a fair amount of science fiction, mystery, paranormal activity, action/adventure, and the altering of realities, but Alexander’s Army takes a darker tone than I saw with book #1.

Michael Malone is a teen who has been recruited into a highly secret organization, known by their acronym UNICORNE, because of Michael’s ability to alter (change) reality.  Michael has learned that his father, who has been missing since he was much younger, was also a member of UNICORNE.  Michael is still hoping he might find out where his father is.

In Alexander’s Army, Michael is given an unusual assignment of infiltrating a comic book store that has had a recent history of unusual activity.  And the fact that they are displaying a new comic with a character that is eerily familiar makes Michael uncomfortable when he enters the shop.

As with the first book, there are moments where it feels as though author Chris d’Lacey is trying to do too much, which muddies and slows the story.    Here that happens near the climax of the action where the action portion of the story would be enough for almost any book, but here we have multiple layers of story with the over-arcing story, that of Michael trying to find his father (which is the piece that holds the individual books together), also trying to command focus.

I don’t want to give anything away because d’Lacey builds his story carefully with each moment being a sort of “ah ha!” moment, but instead of being some sort of big reveal, it really is just one of many story-building blocks along the way.  There’s always a trust between author and reader … trust that the author won’t disappoint and that everything (s)he is sharing is important to the story … and if the reader trusts d’Lacey through each building block, there won’t be any disappointment.

But note what I wrote earlier … this story is darker and the fantasy element borders on a little creepy.  It just so happens that I like a little creepy, dark fantasy in some of my fiction, so this worked well for me.  But what doesn’t work well is something I’ve written about before … the lack of ending.

D’Lacey does bring about a conclusion to the immediate story of Alexander’s Army, but the larger story arc is hinted at very strongly and there are numerous story pieces that are unresolved.  This leaves the reader unsatisfied with the book while also doing just what the publisher wants, which is to anticipate the next book in the series to find some resolution.  I do not appreciate reading a book that doesn’t have a conclusion.

Unfortunately (for me, but fortunately for d’Lacey and his publisher) I am hooked and want to see this story through.

Looking for a good book?  Alexander’s Army is a dark fantasy for young adults that intrigues and keeps the reader on edge, but beware — it is a part of a series and likely difficult to read as a stand-alone book.

I received an electronic copy of this book from the publisher, through Edelweiss, in exchange for an honest review.