STUFF YOU SHOULD KNOW ABOUT STUFF – Tripp Crosby and Tyler Stanton 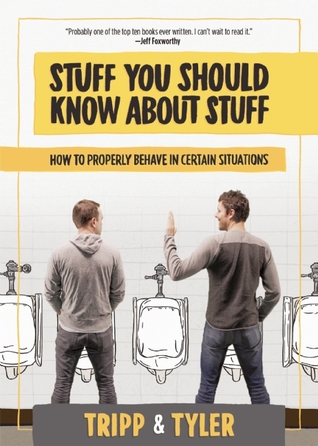 I am a fan of ‘bathroom reader’ books.  You know … books with packets of information delivered in small bits so that you can read just as long as you need to and not get carried away by a story.  Typically these are trivia books, or joke books, but Stuff You Should Know About Stuff, by Tripp & Tyler, which is neither, qualifies as bathroom material.  In more than one sense of the term.

Tripp & Tyler are apparently a comedy duo, though I am not familiar with them (I may have heard my children mention their name).  This makes a lot of sense because it reads a lot like an attempt to put into book form a stand-up comedy routine.  This is an idea that just doesn’t work, especially if, like me, you can’t hear the author’s voices.

There were moments that made me chuckle, and moments when I nodded my head at the truthfulness of a humorous situation they pointed out, but these moments were far too few for a 200+ page book.

The book delivers a college-male-eye-view at topics ranging from “Rules for My Waiter” to “Public Restroom Etiquette” (“Know when to hold it…and develop a minor intestinal problem rather than risk having the stench embed itself in your clothes.”) to “What to Do When There’s Awkward Silence” to “Checklist for Middle School Popularity in 1993” to “Things Guys Never Do with or Around Other Guys” (“Apply sunscreen to another man anywhere other than his back.”).  I think you get the picture.

I’m clearly not the target audience for this book, but then…I’m not sure who is.  Is this the sort of book that would appeal to fans of Adam Sandler and Seth Rogan films?  Quite possibly.  Is that a big book-buying audience?  Well…that’s not for me to decide.

This is, however, precisely the sort of book I would keep in my bathroom for those times when I find I have a little time on my hands, should it be given to me as a gift.  It is not, though, the sort of book I would buy on my own.  Not knowing the authors were comedians, I was expecting a book to have a little more ‘fact’ — stuff I SHOULD know about — mixed with humor (“stuff”).  Instead, it was college humor drivel.

Looking for a good book?  Stuff You Should Know About Stuff by Tripp & Tyler doesn’t really have anything you should know, but rather takes a slightly humorous look at things you already know.

Stuff You Should Know About Stuff: How to Properly Behave in Certain Situations