IN THOSE DAYS – Kenn Harper 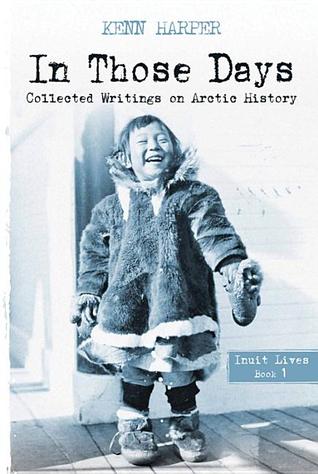 I’ve really come to appreciate Inhabit Media publishing for the variety of books on Inuit themes.  I can’t say that I’ve ever been particularly knowledgeable, or even, perhaps, interested in, the Inuit history.  But I realize now that it’s likely because it’s just never been in front of me.  Since sampling a few books, I’ve become very interested in these hearty people.  Kenn Harper’s book, In Those Days, is a collection of newspaper articles he’s written which are generally brief biographies of a variety of Inuit people.  Now the Inuit as a ‘people’ become individuals.

Harper’s writing is very clean and quite readable, without being dumbed-down.  I’ve chosen to follow Harper’s blog, and the on-line newspaper that he writes for, based on my enjoyment of this book.

In Those Days features a number of interesting articles, my favorite of which was “Inuit at the World’s Fair” in which an Inuit girl, Nancy Columbia was voted prettiest girl at the fair with 8,000 more votes than the runner-up.

But articles such as “Who Was Albert One-Eye?” and “An Inuit Boy in Scotland” and “Simon Gibbon: First Inuit Minister” and “In Memory of John Shiwak, Inuit Sniper” are also extremely interesting.  In fact, there’s not a bad story in the book and each mini-biography is well researched and presented.

This is a wonderful book that opens windows to let the world look in on the early days and lives of the Inuit people.  Even if you’ve never heard of the Inuit or never thought you’d be interested in learning more about them, Kenn Harper will change your mind.

Looking for a good book?  In Those Days is a collection of mini-biographies of some early Inuit people and is a book you want to read, even if you don’t realize it yet.

In Those Days: Collected Writings on Arctic History: Inuit Biographies