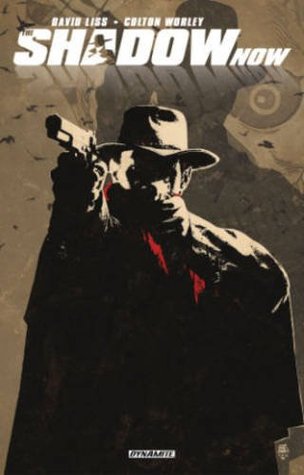 I really like The Shadow.  I listened to the stories on the radio when CBS used to re-run old radio serials, and I devoured the books that I scrounged from used and antique book stores.  I even liked the Alec Baldwin film!  And Dynamite Entertainment has put our dear Lamont Cranston to the test on many new titles, which I’ve liked to varying degrees.

There is something almost beautiful about the noir-ish world that the Shadow inhabits in the 1930’s and ’40’s just as Batman’s dark world fits him perfectly.  Now…take The Shadow out of his world and put him in Batman’s crime-riddled dark city, and while it seems like it should fit well, it doesn’t.

Author David Liss brings the story down by trying to show us the human side of the character and I question this intent.  Lamont Cranston can be human, but his alter ego needs to remain shadowed.  The hero is much more powerful (both as a hero and as a figure for the reader) with an air of mystery surrounding him.  And quite frankly, this struggle to ‘fit in,’ to try to understand a world that isn’t his (nor should it be), grew tiresome.

The art, by Colton Worely, drove me crazy — not in a good way.  How to describe this…?  Photographic/plastic.  Each panel looked like a screen shot from a mid-range-quality video game.  You know… where the people look like people but with an odd, unearthly, plastic appearing quality.  There are lots of shadows and darkness, as you would expect, but there are also lots of strange lighting angles meant to add an air of mystery, but really just make me wonder why the light is coming from that direction.

As someone who enjoys reading The Shadow stories, I was really looking forward to a new look at this classic crime fighter, but was ultimately left very disappointed.

Looking for a good book?  The Shadow Now is a graphic novel that struggles to make a Depression-era hero relevant today.