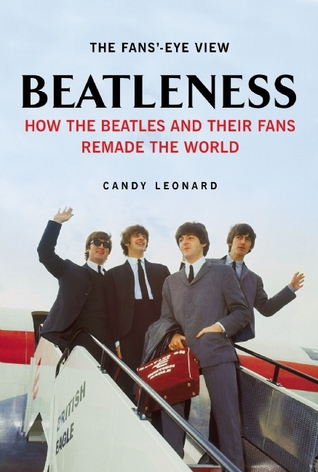 In keeping with my Beatles reading, we have here another new book with the Fab Four as the subject.  This one, Beatleness, by Candy Leonard, might actually be one of the more important books on the subject.

There are plenty of books that look at the beatles themselves and their music (deservedly so) and it seems that there isn’t much new to be mined there.  So much scrutiny has been made of every single word and note that these four men have produced that it seems unlikely that we can get much more from it.  But what hasn’t been fully explored, until recently, is the social atmosphere created around and by the Beatles.

Recently I reviewed The Beatles Are Here! which collected essays from a variety of sources (including, most interestingly, the girls pictured in a prominent photograph).  This latest book, Beatleness, takes this one step further.  Rather than essays by a select few, Candy Leonard interviews a cross-section of individuals and gets to the heart of the people who changed (or formed) a turbulent decade — the fans.

Arguments can be made over the music of the Beatles and whether or not they were/are incredibly talented or mostly lucky (my personal feeling is ‘talent’), but there are musicians and groups all over the world who have incredible talent and push the limits of conventional music, and so few of them get the attention that the Beatles received.  Without the fans, the Beatles would never have achieved the status that they did, and the world wouldn’t have changed the way that it did.

Of course it’s not as simple as all that… the fans were affected by other issues (the assassination of JFK being just one issue) that led to the search for something new, and the Beatles’ fit the bill.  Candy Leonard’s book takes a look at many of these things, ties so much of it together, always using the words of the fans themselves, to highlight the scene. One thing that struck be quite a bit was what I interpreted as a clear difference between the older fans, who grew up with the Beatles from the beginning, and the younger fans who gained their ‘Beatleness’ a little later (often through an older sibling).  Their reactions and interpretations of the music and the era tended to be quite different.

I see this book as being incredibly valuable, particularly to anyone with an interest in sociology and human behavior and a study of the turbulent 60’s/70’s.  The sociological aspects of the fans of the Beatles is a story much greater than a story about four pop musicians.

Beatleness: The Beatles, the Fans, and the Sixties Revolution