Posted by Daniel on September 19, 2014
Posted in: Uncategorized. Leave a comment 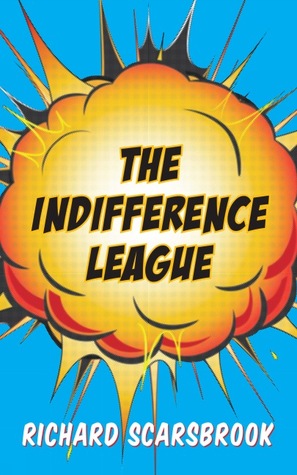 Reminding me of films like Diner and The Big Chill and The Return of the Secaucus Seven and even, perhaps, a bit of the old television program thirtysomething, The Indifference League by Richard Scarsbrook is the slightly sentimental story of a group of Gen-X and Gen-Y friends getting together for their annual long-weekend reminiscing.  They once gave each other nicknames such as The Statistician, Hippie Avenger, Time Bomb, SuperBarbie and SuperKen, Mr. Nice Guy, and The Drifter.  The place of retreat, the home of one of the friends, is known to them as The Hall of Indifference.

In their youth, their nicknames were fun, funny, and clever, but as they age, the reality of the names and how they’ve grown in to them, or not, can be striking.  The funeral for one of them is a solemn reminder of what they’ve achieved and have yet to achieve.  They are often bitter, hiding it (sometimes) behind cynical humor.  There is lust and longing, ocassionally unrequited, among them, and secrets that slowly come to light.

Not too surprisingly, I recognize people here and I think that’s part of the attraction.  Many of us (I’m a little older than a Gen-X or Gen-Yer) grew up like this and still maintain these same sorts of friendships.  Our lives are tightly intertwined when we’re younger, but as we grow up and grow apart, getting together can often feel important and yet a struggle at the same time.  We often want to cling to those fun days of our youth, but it gets harder and harder to maintain the same carefree lifestyles.  The members of The Indifference Leagueare perhaps not feeling so indifferent at the moment.

I really liked author Scarsbrook’s employing the superhero motiff here.  It is what first drew me to the book.  But the characters and their relationships are what kept me interested.  The humor is often dry and it is easy to picture the people here and what they are saying and doing.

I’m not sure we would want to be friends with anyone here, but it is more than likely that most of us reading the book can picture our own friends in some of these roles.

It is not a unique story (the list of movies and television shows above clue us in on that, and I’d recommend Merit Badges by Kevin Fenton for a solid novel on friendships forged in high school [have I really not reviewed that book?]), but it is told in a unique way, and for that I really enjoyed this book.

Looking for a good book?  The Indifference League by Richard Scarsbrook is a story of friendships and lives that grow apart and weave together as they try to hang on to, and simultaneously outgrow, their pasts.