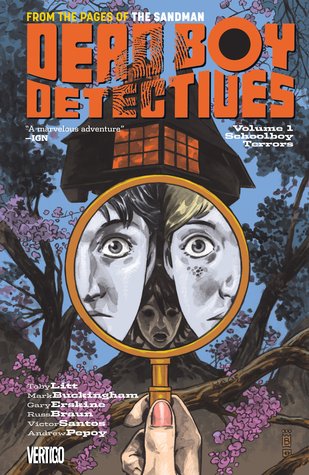 I’m going to start this review by stating that I’ve never read the Sandman graphic novels. I know … I know … don’t hate me for it!  Why do I want to state that I haven’t read Sandman?  Because the very first words at the top of the cover of this book are: From the pages of The Sandman.  I have no way of knowing how this book, or these characters fit within the Sandman stories or universe.  I chose to read this book because it sounded like the blending of two interesting genres: mysteries, and supernatural/horror.

It is the blending of two genres.  But it isn’t interesting.

First…it doesn’t appear to be one story, but a few stories.  The unifying theme is the two boys, who are dead, deciding to be detectives for the afterlife (well, maybe not just the afterlife).  In the first story, they go in search of a dead cat, for two dead girls.  Um…yup…that’s pretty much the extent of it!  Then the boys visit the school where they were brutally murdered.  The school is still host to bullies, only know the bullies are also dead and still picking on kids like our two detectives.  There’s a teacher who is a terror who the boys manage to evade, and there’s a non-dead girl investigating ghosts who visits the boys’ school.

I read this book twice because I just couldn’t follow what was going on.  The second reading didn’t help much.  I’m not sure when I realized that the boys were dead (I think they say something about it, but it’s a few pages in.  So, too, with the girls looking for their cat.

There’s a strange lack of division between the dead and the living throughout, and you have to wait to be told who’s dead and who’s alive and, well, that just doesn’t work too well.  The story(ies) jump around a bit and because we don’t really know anything about these characters, it just doesn’t make a lot of sense.  This has me wondering if the characters are better outlined in the Sandman comics and it is presumed that readers here will know who these people are.  If so…presumption wrong.

I wanted to like this.  It seemed to have a lot going for it.  I even gave it a second shot.  But I still didn’t really care for the characters or the story line.  The art is decent; at times really nice and at times rather average.  But I wouldn’t buy this just for the art.

I might choose to thumb through the next volume to get a sense of whether or not the story has picked up, but I’m not holding out a lot of hope.

Looking for a good book?  Dead Boy Detectives tries to blend mystery and the supernatural, but simply gets confusion.