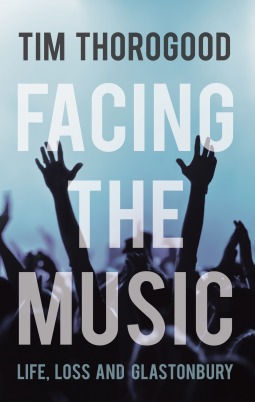 What happens when a man loses his wife in an accident and he can feel his children slipping away and everything good he once thought about the past turns out to be a lie? He goes to a music festival, of course!

Gary Cochrane is a single parent of two teenagers.  The kids are trying to get out from under their father’s control and become adults, while Gary struggles between losing control of his kids and finding a way to hang on to his youth.  It’s a fairly typical struggle and anyone who has teenagers, or who was a teenager, will understand and empathize with the struggles.

The backdrop of the world’s largest open air music festival is wonderful and I love the dual meaning of the title as Cochrane is facing not only the music of the festival, but forced to face the music of change in his life.

But while the idea of the story and the location are well met, the character of Gary Cochrane is depressing, destructive, and I never understood why I should care about his story.  Numerous times while reading I simply got frustrated with his actions and controlling and I simply wanted to slap him around a bit.  But it wasn’t just that he was controlling about his children’s lives…it’s that he didn’t seem to understand when to let go and when to let go and when to have the stronger hand.  It’s as if author Tim Thorogood purposely had him doing the opposite in each instance, just to make sure we, the readers, understood that Cochrane was struggling to be a good parent.

Cochrane explores the festival on his own, and does a pretty poor job of it, immediately getting himself involved with excessive alcohol and drugs.  I think this is the part where he is re-experiencing his youth.  And of course we can see where his kids are headed!

The troubles keep piling up on Cochrane to the point where I actually exclaimed aloud, “Good grief…are we really going there?!”

Cochrane does manage to redeem himself in the end and learns to let go of the reigns just a little bit, even when faced with adult peer pressure (a little overly played, in my opinion), but by this point we’ve already stopped caring about him.  We can have hope for the kids, but it’s not really their story.

This one just didn’t work for me.

Looking for a good book?  Fans of the Glastonbury Music Festival may welcome the setting and enjoy reminiscing in Facing the Music, but the story of the single parent struggling with parenthood of two teens is dark and difficult to enjoy.