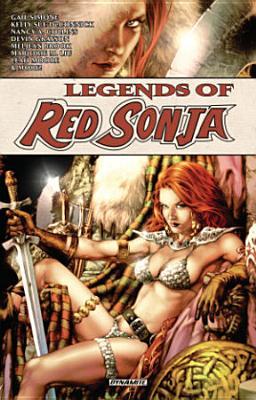 I’ve commented, more than once lately, on the quality of the artwork in some graphic novels and the poor choices in over-emphasizing the female form.  Here is a character who is almost begging to be viewed sexually (no emails please … let me finish!) and yet this book is incredibly tastefully put together, both from a writing standpoint and an artistic viewpoint.

Gail Simone is the author of the arcing story and she has gathered together some of the top female authors (such as Tamora Pierce, Mercedes Lackey, Marjorie M. Liu, Nancy A. Collins, Kelly Sue DeConnick, and Rhianna Pratchett) to help with some of the ‘legends’ of Red Sonja.  It’s a bit of a coup to have the stories of Red Sonja told by women only because she’s been more of a sexual object who fights rather than a fighter who is sexual.

I really appreciated these brief looks at the early Sonja and what led to her fame.  Perhaps my favorite moment was when she was first given the chain-mail bikini (by another female warrior) and told why she should wear it.  But all the stories, while not intrinsically exciting as individual story-lines, were nice vignettes telling the Red Sonja legends.  Simone’s over-arcing story holds the legend pieces together nicely, though there’s nothing earth-shattering here and no conflict that has us holding our breath.  Simone tries to add a conflict story, but it is the legends that we’re most interested in reading.

The artwork varies.  The over-arcing story art is classic ‘barbarian-style-comic-book-art.’  If you’ve read comics, you know what I’m talking about… the Marvel® style Conan‘s (think Buscema and Alcala).  In fact I wondered if one of the characters wasn’t Conan with a goatee.  The ‘legends’ art was sometimes so simple as to create a Disney-fied effect, which didn’t work for me.

The last portion of the book (a little too much of the book) was filled with the obligatory ‘extras’ that have become commonplace, and in this case (again, like most others) it is the written script by Simone with some sketches.  These can be fascinating, getting a glimpse of how the writer ‘sees’ the action unfolding on the page, but since I’ve just read the story, with completed art, why do we think I’m interested in reading the story again?

Looking for a good book?  If you like the warrior age of sword-and-sorcery heroes, such as Conan, Kull, and Red Sonja, then this look back at the Legends of Red Sonja is the perfect book for you!