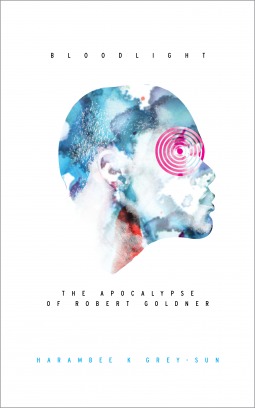 Writing jacket copy and ad copy about a book can be an art form that rivals the writing of a book itself.  In this case, the paragraphs about the book are much more interesting than the book itself.

Bloodlight is actually two books.  The first book, which takes 80% of the book, is about high school student Robert Goldner.  Robert, an African-American student feels out of place.  He is on the school wrestling team and has high hopes for a trip to the State competition.

Robert struggles with all the typical high school problems.  Girls, class work, friendships, sexuality.  His being African-American adds to his social struggles.  But it’s his little moments of distraction that bother him the most.  He’s having headaches/visions/problems focussing.

The confusion isn’t in the metaphysical world.  For anyone who enjoys reading speculative fiction or the strangest of fantasies (think Harlan Ellison, Philip K. Dick, Kurt Vonnegut, James Morrow), this kind of adventure isn’t anything too unusual, or at least unexpected.  So it isn’t the fact that it’s “metaphysical” that’s the problem.  The problem is in the planning and the execution of the work.  We don’t need 80% of the book to be a character study.  And if the time is going to be taken setting our main character up as a champion-quality wrestling student, wouldn’t you expect a metaphysical/existential book to see a climax where the character wrestles literally and figuratively with God?  Major missed opportunity.

The general writing is readable.  I actually found Robert Goldner an interesting character and was moderately interested in the book.  Even though what attracted me was the ‘metaphysical’ description, the ‘plain-ness’ of the YA aspect were more interesting.  But here too, the author and/or publisher, doesn’t understand what this book is.  I read two ‘warnings’ that this was not a Young Adult novel.  Yes it is!  The author may not be intending it for young adults, but a book about a 17 year old boy in school with ‘issues’?  So what that it has a metaphysical aspect to it?  Some teens really would enjoy that and empathize with the school struggles.  Don’t under-estimate the power of teen readers!

But while it is readable, it is far from exciting or powerful.  There is one, sorrowful, bitter tone through the entire book (this alone is typical for classic YA books) and neither the wrestling scenes nor the metaphysical confrontation scenes build with any energy.  The closest we get to anything powerful is when Robert declares, “Maybe I couldn’t win the state of Virginia … but I’ll damn sure win the state of my soul.”

This book will rate two stars because, although the author’s intent didn’t play out well and the metaphysical aspect (which should have been the most compelling part of the book) felt tacked on at the end, the longer first portion, the teen struggles of Robert Goldner, was actually an interesting read.

Looking for a good book?  Bloodlight by Harambee K. Grey-Sun reaches out to be something ‘deep’ and ‘metaphysical’ but it only gets there through a tagged on ending after a book full of teen angst.

Bloodlight: The Apocalypse of Robert Goldner