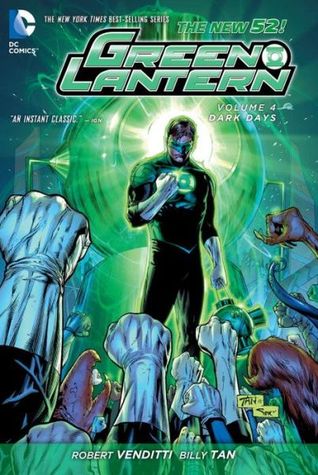 In Green Lantern, Vol. 4: Dark Days we have a disaster of another sort.  We start with Hal Jordan now the head of the Green Lantern Corps.  This is not the smooth, rather honorable Hal Jordan of his early days in the series, but the Hal Jordan with an attitude.  Hal starts with a strange attack by an Orange Lantern who seems to only want some shiny toys.  Really?  I just about stopped reading early on just because of this strange weakly-motivated attack.  And worse yet, Hal and what’s left of his corps can’t handle the attack very well, so Hal makes a judgment call and sends out the rings of fallen Lanterns for new recruits.  (Clearly I’ve missed something as I don’t know why the rings hadn’t gone out before.)

The only thing that kept me in the story was that all the rings suddenly, inexplicably lost power.  Had it been just the Green Lantern’s, I might still have stopped, but the power-outage was across the spectrum of rings.  This was potentially intriguing!  Even the minor relationship squabble between Hal and Carol was simple and stupid.

Finally the real story develops.  A figure by the name of Relic appears.  Relic is the discoverer of the powers behind the spectrum and he is awake to preserve the power of the light.  Every time a Lantern uses his/her ring, energy is drained from the ultimate source.  Relic, therefore, is there to protect the power of the lanterns and Hal, in his new, egotistical, macho mode, essentially say to heck with it…it’s worked for hundreds of years, it will work for hundreds more.

Clearly there are some parallels with our own worldly views on energy, the oil crisis (or lack of crisis, depending on your view) being one of them.  But why does our titular hero take the opposition view?  Ah…well therein lies a major source of conflict, as some of the Lanterns under Hal’s charge think that they should be more conservative with using the rings’ powers.  And the potential for using up a major universal energy source sets this story in the high drama stage.  Unfortunately, it’s all treated rather immaturely.  Relic is fought off quite easily and the new knowledge of the rings’ limits isn’t treated with the respect or concern it should.  There is, however, another disaster of epic proportions which over-shadows the new knowledge of the rings, but this disaster, too, comes as a bit of second-hand information, rather than the culmination of an epic story.

I’ve always enjoyed the Green Lantern series, and I used to be a fan of Hal Jordan, but this new Hal, is not heroic or leader-worthy, and while there’s a lot of great potential in the stories, there is no focus.

The art by Billy Tan works well.  There is nothing extraordinary here, but nothing embarrassing either.

Looking for a good book?  Green Lantern, Vol. 4: Dark Days introduces some great themes and plots, but none of them is built to their potential.