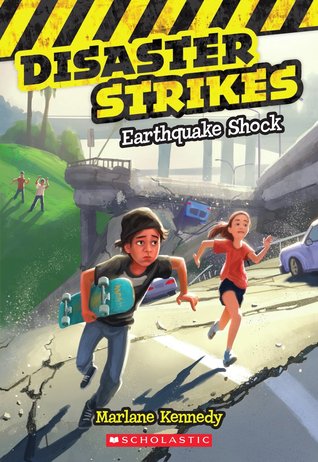 One of the things that has always drawn me to books for younger readers is the opportunity (or challenge) to teach, or share information, in an entertaining and exciting story.  This new Disaster Strikes series is a little more overt in its educational aspect (emergency preparedness), but it is still a fiction story at its heart, with a disaster as the springboard for the story’s action.

In Disaster Strikes #1: Earthquake Shock, author Marlane Kennedy sets her story in Los Angeles where Joey Flores is skate-boarding with his peers Fiona, Kevin, and Dillon.  Joey and Dillon are not the best of friends, and when Joey’s mother appears to drive Joey home, Dillon teases Joey.  However, with Dillon’s help, Joey manages to convince his mother that they will all be leaving the skate park soon and that he’ll be safe walking home.

As the four friends start home, a major earthquake rumbles, dramatically moving the land where they are and crumbling an overpass that they are passing beneath.  They get separated by the fallen concrete.  Joey and Fiona are concerned that Kevin and Dillon may have been crushed.  It isn’t safe for them to walk over the concrete as it may shift in an aftershock, so they hurry around the overpass.  They find Dillon, alive, but trapped beneath some concrete.  Rescuing Dillon, and finding Kevin, they continue on, wondering if they will even have homes to return to.  They find a little girl, wandering lost.  When they find the girl’s mother, the girl nearly runs from their arms and across a live, downed power wire, until Joey saves her.  They make it to their homes, but due to concerns about ruptured gas lines, they spend a night in a nearby shelter.

A lot clearly happens in the brief eleven chapters of this early-reader book.  But that’s okay.  The story moves along quickly and packs in quite a bit.  However, because of this, the troubled relationship between Joey and Dillon didn’t play out very well and was mostly unnecessary.

Because of the didactic nature of the book, I have concerns over one issue.  When Joey and Fiona find Dillon with his leg trapped under some rubble, Joey climbs in, head first, under the rubble to see how Dillon is trapped.  He squirms around, uses a knife to cut Dillon’s pant leg to free him.  If Fiona and Dillon hadn’t then both pulled one of Joey’s legs, he would have then been crushed as the rubble shifted.  But just moments earlier, Joey himself notes that the rubble could shift and they should stay clear of it.  Yet he only pauses briefly to weigh the concerns of climbing completely under.  The narrator notes:  “But that was a risk Joey had to take.”  Really?  I don’t think so.  I think I would have to have some serious conversations with my children about this.  Risking one’s life for someone else’s legs doesn’t seem a fair trade-off.  Dillon’s legs may have been crushed if the rubble shifted, but he wouldn’t have been killed.  I think it would have served everyone much better to seek an adult’s help, but to stay with Dillon in the process.

Otherwise, the dangers to be on the look-out for are well described both in the fiction portion of the book, as well as in a few pages of earthquake facts.  Those who don’t live in earthquake areas are sure to learn something about earthquakes and their dangers, and those who do live in high-earthquake areas will likely be reminded of a few things.

Looking for a good book?  This early-reader adventure will entertain and teach a few things about what to watch out for when in an earthquake. 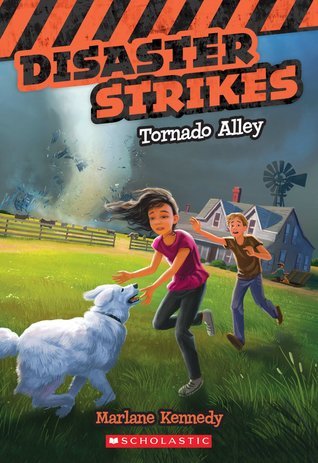 The second book in the Disaster Strikes series is “Tornado Alley.”  The story takes place on a large ranch in Oklahoma.  Wyatt, his friends Joshua and Jackson, and Wyatt’s cousin Alison are out fishing at a pond when a storm moves in quickly, and produces a monster tornado.  They manage to get to a storm cellar, but Alison runs toward the barn (and toward the tornado) to get her dog.  They don’t have time  to flee the barn, so they cling to the bottom of a tractor when the tornado is on top of them, tearing the barn apart and tossing them around.  As Wyatt says to Joshua and Jackson later, “Thank goodness the barn didn’t collapse or we actually would have been goners.”

The kids upright some tossed-about four-wheelers and head out to look for Wyatt’s father.  Just as they find, driving toward them, they watch another tornado develop right between them.  The new tornado is headed their way and, unable to outrun it, they lie flat in a ravine.  They soon realize, though, that the tornado isn’t headed their way after all, and as they stand to see what’s happening, they see Wyatt’s father’s truck get tossed around by the tornado.  Wyatt’s father is injured, but alive, and Alison performs first aid — something she learned in Girl Scouts.

Joshua and Jackson, with Wyatt’s help, go looking for their parents; their home is nearly demolished.  They rush in to an unsafe, damaged home.  They first have to rescue Joshua who is hanging from a collapsed stair-case, and then the parents, who are trapped in their cellar from debris against their exits.

Like the first book in the series, we manage to get a number of potential concerns from a tornado, not just the tornado itself.  Here it’s mainly debris and unsafe structures due to the damage.  But also, as in the first book, we have youngsters doing things that they shouldn’t, putting themselves in harm’s way. But these instances felt ‘real’ in the sense that they are what kids their age would likely have to deal with or how they might truly react.

The ‘story’ book-ending the disaster didn’t really work.  I think it was supposed to be about Wyatt not looking forward to entertaining his cousin Alison and his coming to accept her and actually look forward to visiting her in New York at the end of the book.  But it was so casual, almost tossed off at the beginning, that it never had anything to develop.  Fortunately, the real story is the dealing with the natural disaster.

The fact pages “More About Tornados” is interesting and probably just about right for an early reader.

Looking for a good book? This early-reader adventure will keep readers turning pages and teach a few things about what to watch out for when a tornado is imminent.