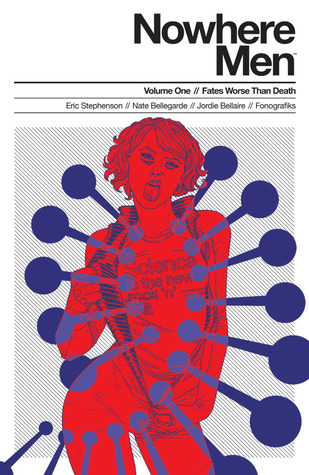 This is an unusual, unorthodox graphic novel that, in graphic novel format, gives the illusion of multiple formats (newspaper clippings, book excerpts, etc.).  The concept is high, it is grand in scope, but tight in execution.

Imagine if the Beatles weren’t musicians, but scientists, still able to draw crowds to follow everything they do and people would buy in to whatever scientific concept or discovery or invention they produced.  This is the very basic premise.  Like most groups, and certainly like the British pop band, this group of scientists split, going their separate ways to work on their own projects.  Friendships remain, friendships dissolve, some achieve greater success than others.  What if we followed scientists the way we follow musicians?

Although the early portions of this book have a 1960’s-70’s feel, we are clearly in an alternate universe, where much is the same, except for our interest in science.  This isn’t too radical a thought as science was certainly at the beginning of an incredible revolution.

One huge, HUGE difference between musicians and scientists, however … when music is done ‘wrong’ or badly, it’s crap and no one listens or buys the work.  When science is done wrong, or badly, it can have the power to kill or destroy.  When four scientist, who were an unstoppable marvel together, split, the tendency is to try to outdo one another.  And sometimes that leads to not-so-smart choices.

The art is not overwhelmingly great or poor… it is workman-like.  It serves its purpose to tell the story.  What is fascinating and greatly appreciated, is the effort that went in to creating all the incidentals.  The apparent ‘photocopies’ of books, the newspaper pages, etc.  The detail that went in to making these look appropriately like what they represent is quite remarkable.

To me, this is a new format of graphic novel.  It is more than just story-telling with art representing the characters and locations of the story.  This art represents a whole lot more.  It is a wonderful blending of story and art, as only a graphic novel can do.

The story itself jumps around a bit, in time, and I never fully linked in to one person or group of people among our fab four.  This made it hard to get in and care about the characters.  I am definitely curious where the nowhere men go from here.

Looking for a good book?  This graphic novel pushes the medium to be all that it can be, and has at its premise an incredible opportunity.  The story suffers just a little, but still worth recommending and reading!