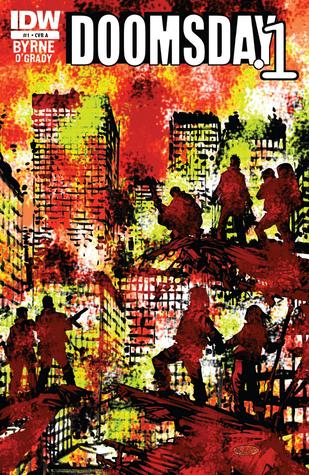 John Byrne is one of those solid comic book/graphic novel artists/writers that you can always rely on to come through for you.

This book of Byrne’s, Doomsday, hearkens back to the 1970’s when Byrne was arguably at his peak … an in-demand (at least from my point as a reader) author/illustrator.  In fact, this is apparently a bit of a re-boot of some of his earlier creations.

The story: a massive solar flare is about to hit the earth, burning to a crisp all but one small section of the planet.  Only that area furthest from the sun at the time of impact comes away without immediate annihilation; an area of the southeastern United States and northeastern area of Central America.  Our story follows seven astronauts on the international space station making plans for an emergency evacuation and intending to stay ahead of the flare as it wraps around the earth.  Those astronauts that survive this initial emergency then must face the devastation on the planet.

The book is put together in classic 70’s style… each comic title that is makes up this graphic novel, is essentially a complete story within itself.  There is the broader story arc of the Doomsday survivors exploring and learning to live life in a new way, but the individual stories are fairly well self-contained within a comics’ pages.  There’s the discovery, capture, and escape (for some) from a Texas prison.  There was the submarine story.  There was the priest in South America story.  To be honest, I’ve missed this episodic story-telling in graphic novels (in novels, in general!).

Also, this was pure science fiction … no horror/fantasy (other than the horror of a devastated planet).  There were no mutant vampires or zombies or beings that have developed strange powers from solar radiation.  This is pure sci-fi adventure, not unlike Zelazny’s Damnation Alley, or James Cameron’s Terminator, or … well, this is the one problem with the book.  The story’s been done and done and done.  What’s different, perhaps, is how doomsday has arrived, but the struggling survivors, trying to make sense of a new and terrible world… I haven’t seen anything to set this apart just yet.

It’s nice to have heroes of ordinary character, and not unrealistically ripped or endowed men and women, or the super-moody, psychologically damaged heroes of the superhero trades lately.  Here too, though, our ordinary characters are almost stereotypically 70’s in feel.  Big, burly, hairy Russian man.  Skinny, frog-eyed Frenchman.  The extremely polite Canadian.

I’m definitely intrigued enough and enjoyed Byrne’s work enough that I’d like to read more.  I actually really like and respect the artwork of much of the comics in the 1970’s.  Byrne, Buscema, Perez…these were just three of the ‘greats’ from the 70’s.   Many of our illustrators today could stand to learn from these artists.

Looking for a good book?  This graphic novel is straightforward sci-fi, written and drawn by one of the greats in the industry,  The throwback in story and art to the 1970’s comics works extremely well.